Tuesday morning in Music City. We’ll get up to 44 today, so the 2 inches of snow that accumulated yesterday will probably be gone later today or tomorrow.

Family day here at the Whyte House yesterday as our daughter Heather was here for one more day with her husband Casey. They leave to go back home to Alabama in just a few hours. To say that my wife Kathy and I enjoyed their company would be a huge understatement. And with the two of them getting ready to move to Germany with Casey’s Army pilot job, we treasured this time more than ever.

It surprised us and snowed early yesterday morning and covered up the roads. But Casey has 4-WD on his pickup so we actually got out for a bit and enjoyed the “white” scenery everywhere we looked. Then we hung out on the couch and watched the first Fisherman’s Friends movies, which has become one of my favorite true story movies ever about those Fishermen in Cornwall who were discovered by a record company singing old sea shanty’s and they became huge stars. 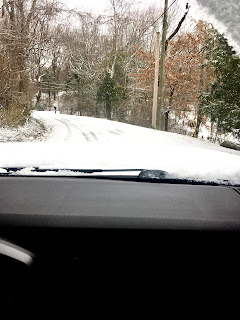 We followed that with episode 3 of “The Chosen” which is also quite wonderful…the story of Jesus. The acting is pretty great, and the actor playing Jesus is just terrific in his role.

Just a great day with our kids in Nashville.

Today I’m featuring the song “Retired” that Ray Stevens recorded. Brent Burns and I wrote this song a few years ago in Gulf Shores when I was at his house for a songwriting trip. I suggested we write a song about the folks that retire near the ocean and “Retired” was the song that came out.  I thought right away that the song was really funny and would draw laughs from the “retired” folks. Has it ever.

Brent was friends with the late Harry Warner who worked for BMI for years in Nashville. Harry would often stop in a Lulu’s where Brent has played for years in Gulf Shores. So Brent called Harry and just flat out asked if he thought Ray would sing “Retired” with him as a duet. Odds are long for that to happen. But Harry got it to Ray who fell in love with our song. That led to Brent making a trip to Nashville to Ray’s studio one day to sing the vocals with a comedy legend. Amazing. Here’s the duet version which is great.

And then something else cool happened. Ray ask to record the song on a new album he was working on and he did. And that’s when I got a call at home one day from Ray asking if I wanted to come to his studio and hear it?  Did I ever. Quite the experience standing next to him in the studio listening to our song. He could not have been nicer and told me much he truly loved our song.

Ray Stevens also showed up at Lulu’s one night with Phil Everly of the Everly Brothers. My friend Brent went out to the car with the two of them and listened to our song. Imagine that. Amazing.

So Ray recorded it once solo, once as a duet with Brent, Irecorded it on one of my albums at a “live” show and a well-known piano player in town Tim Atwood has also recorded “Retired”. I’m forever grateful for the inspiration that day, and for Brent reaching out to Harry Warner. Proof that nothing good can happen if you don’t ask or try.

Gosh, I’m glad I didn’t have to fly anywhere over the holidays. Southwest cancelled a whopping 70% of their flights yesterday because of bad weather all across the country. That’s a lot of folks sleeping in airports or stranded completely.

I’ve had that happen as most of us have if you’ve flown any amount of time at all. Been stuck on a tarmac for hours…the worst. I always try and remind myself that it’s not the flight crews fault. They want to get off the plane too. And the last thing they want to do is deal with angry folks in their seats. It’s just part of the traveling experience when you fly in the winter or over the holidays. I’ve got a couple of winter flights coming up so I’ve already got my fingers crossed hoping those go smoothly.

On top of everything else the number of strep cases are on the rise to add to the mix of COVID and flu, and whatever else is out there. I’ve had strep one time. Worst thing ever. I laid on a couch for a week I think and did not want to move or swallow as your throat is literally in fire. Can’t remember how many shows I missed with my band at that time.

And Harpers Ferry National Historic Park in West Virginia is requiring visitors to mask up when they are indoors on site because of the spike in COVID cases there.

An article I read this morning listed over 100 items they suggested might be cool to own. I didn’t even know these existed.

This pointed message to anyone on your porch. 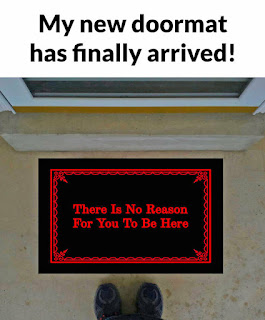 A drone that looks like Snoopy riding his doghouse.

And who does NOT need a coffin shaped chair in their office? 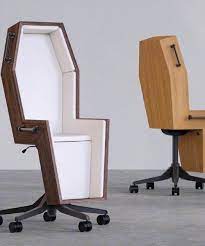 If the snow does not melt off of our treacherous road today, I’m debating if it’s worth taking a chance of getting stuck since the Mega Million drawing tonight is 565 MILLION. It would allow me to afford buying a coffin shaped chair or two if I hit.

Gas is down to about $2.35 where we live. But according to GasBuddy $4 a gallon gas may be here as soon as May when we start hitting the roads again with better weather. Sigh. The only good news if that happens will be my “Dipstick” song returning to popularity again.

My Hubby Gave Me A Gym Membership For Christmas. Should I Be Mad? (uh…my wife wouldn’t have to ask that question had I gifted her that way)

We’ll say goodbye to our kids as they return home, and then I’ll start trying to figure out what to do with all the empty Christmas boxes laying around in our living room.