Monday morning and I hope you and yours had a wonderful Christmas! They’re actually calling for a little light snow in Nashville this morning with a high above freezing. Almost 40 degrees for a high today and back up close to 70 by the weekend.

Well, we went through the really cold weather too. Down near zero part of the weekend, and e we had a little snow mixed with power outages, cars off the roads  and rolling blackouts… a first in the history of Tennessee. We did not get a notice from our electric company so it was a surprise when the power went out in 15-minute increments four different times early Friday morning. About the time I’d find the flashlight and light a candle or two the power would pop back on and I’d walk around resetting every clock we have. Nashville is not prepared for sub-zero and the power grid here was not capable of the high demand from folks who were cranking up their heaters. I’m not political but, we are dropping a BILLION bucks on a new football stadium? Might want to spend some dollars on our electrical grid while you’re at it.

Our daughter Heather and her husband Casey arrived around mid-afternoon driving in from Alabama after they had just driven to Miami for a little Christmas time with Casey’s Mom and stepdad. Lot of miles. But we were so glad to see them. They are getting ready to be deployed to Germany with the Army here in a few weeks, so we are truly cherishing this time with them, talking about their big move and all that entails. Casey is a pilot and his job will be to fly officers or whomever needs to be flown to wherever in Europe they need to go. And exciting job for sure, and they will be located in a very pretty party of Germany. We’re planning trips already.

We exchanged Christmas gifts, Kathy fixed a wonderful Christmas dinner, and we watched the new Christmas movie "Spirited" starring Ryan Reynolds and Will Ferrell that’s showing on Apple+ right now. Sort of a “musical” twist on the Christmas Carol if you will. Different…but fun. Just a very blessed Christmas…and we’re thankful for it.

Today I’m featuring the song “Looking For Audrey” that I wrote with Linda Davis and Bobby Tomberlin one morning at Linda’s house. We gathered around her piano and really did not have anything to write about until Bobby started talking about visiting the grave of Hank Williams in Montgomery, Alabama. Bobby is from Alabama and has a deep love for the history of country music and knows and writes with some of the Williams family. He hangs sometimes with Hank Jr. So from that conversation we wrote a song about the ghost of Hank showing up night after night the same bar looking for his ex-wife Audrey. In real life they were divorced at LEAST once, but most think Hank always loved Audrey until the end.

The song just turned out great and Bobby recorded it on one of his albums, and then later a traditional country singer friend of mine in Cincinnati Bobby Mackey also recorded it and the song was nominate for Josie Award last year.

And a couple of very cool things have happened from this song. One, Audrey had a cabin in Gatlinburg for many years. She and Hank Jr. spent quite a bit of time there. One year during the Gatlinburg Songwriters Festival Bobby took me to that A Frame cabin where all kinds of pictures of Hank, Hank Jr and Audrey were on the walls. Also on the wall was a handwritten lyric sheet of our song “Looking For Audrey” that Bobby had given the family because they too loved this song.

And the other cool thing is an artist in Alabama heard Bobby sing it in concert and was so moved that he hand painted our song, capturing a lot of what the song reveals and then gifted me, Bobby, and Linda with a copy of it. Amazing how a song can touch strangers life this way. 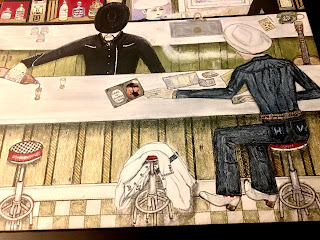 The US hit an ominous number. 100 million cases of COVID have been recorded, more than any other country. And they think they might be underestimating that number.

Over the weekend the new COVID law did pass. No more required vaccinations for military members.

Maybe a sign we’re moving on? The top health relate searches on Google this year did NOT include the word Coronavirus.

A cyber expert guy listed some passwords that are so weak that we should never use them. Right at the top of the list of course is the password “password”. Uh…seriously?

If you’re using any of those, he suggests you change them.

It is the COLDEST time of year for sure. Oddly enough, there are great deals on ice makers. 40% off on some on Amazon. Thought you should know.

Up to 70% off on some items there right now. I’ve never cared or been disciplined enough to run out after Christmas and buy bargain stuff for Christmas gifts for the next year. Or to buy deeply discounted gift-wrapping paper. Heck, I forget to use a coupon even if I have one with me.

Vacuums, Apple watches and foot massagers are three items with big discounts at Wally World right now. If you’re going to Walmart to buy some of that?  Pick up some wrapping paper for me if you would.

Oh, and Walmart has begun drone delivery in a few states so that wrapping paper could be dropped from the sky onto your front porch. Cool. Just don’t order eggs.

I read an article where they listed the funniest “tweets” from women in 2022. Here were two that caught my attention…from women.

“My mother has a medical podcast where she self-diagnoses her ailments. It’s called “My Voicemail” and it happens every morning at 9 AM.”

And this one from a woman with a great macabre sense of humor:

“At my funeral take the bouquet off my coffin and throw it into the crowd to see who’s next.”

The New York Post printed an article about things we Baby Boomers do that are just not cool. Some of my favorites in the article are: Going to the mall, writing checks, and believing in conspiracy theories. Here’s the article if you want to see the remaining items they listed.

I have to remind myself when I’m songwriting with younger folks and artists that if we’re talking they won’t have a clue about land lines, outdoor johns, and Pat Boone. My friend Brent Burns and I were talking about that and it prompted Brent to record an entire album geared toward Baby Boomers including this song that I’ve always loved, the title track “BabyBoomers”. Click on and listen and see how many of these things you remember. Then play it for your kids and see how many of these things they don’t have a clue about. Sigh.

Dog sets house of fire after turning on hair dryer. (Get a short haired dog folks.)

Mega Millions is up to 525 MILLLION right now. So I think I’ll buy a ticket to see if I can’t win a nice post-Christmas gift.

We’re still in the Christmas mode for one more day as our daughter and her husband are spending one more day with us before returning home tomorrow. So we’ll be enjoying that for sure.