Thursday morning and the sun is coming up over the Gulf of Mexico. 76 for a high today which should make it comfortable for my outdoors 5 pm show this afternoon. More on that and my songwriter schedule for the week at the end of the blog today.

I took time to get registered for the Frank BrownSongwriters Festival at the world famous Florabama where my “Hits & Grins” trio will be playing tonight at 10 pm. 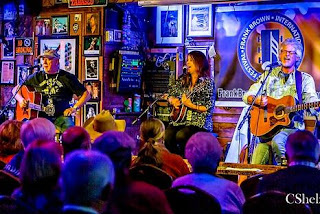 At registration they give each songwriter a nice gift bag. Poster, hat, t-shirt, and this year something special. This coin with the face of Joe Gilchrist on it. Joe is the founder of this great festival on the Gulf Coast, and he passed away last year. So this year’s festival honors his memory. He was perhaps the greatest fan and supporter of songwriters ever. A dear nice man who is missed by so many who love original music and play original music. 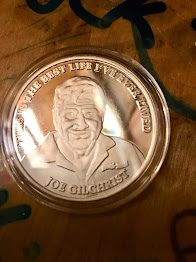 I also grabbed lunch at the Florabama that they provide each year, every day of the festival for the writers. Thank you to those folks who make that happen. It was pizza yesterday!

I had fun doing the “posting” thing about the CMA Awards show last night on a couch here in Gulf Shores. If you missed it, got to my Facebook page.

Big night for Luke Bryan, Lainey Wilson, and Cody Johnson. By far, it was the best COUNTRY awards show in a long, long while. A great tribute to Loretta and Alan Jackson. Carly Pearce wowed with an almostbluegrass performance with Ricky Skaggs, Sonya Isaacs and award-winning instrumentalist Jenee Fleenor helping out on fiddle on a song Carly recorded and wrote about Loretta.

And then Patty Loveless showed up, whom we have not seen in a while and killed “You'll Never Leave Harlan Alive”. Where have you been Patty?!

Peyton Manning and Luke Bryan did an “okay” job of hosting. Not as funny as I thought they might be, but after their monologue with some corny jokes, they did the right thing and just kind of stayed out of the way and let the show flow.

Kudos big time to the producers this year who obviously put together a “country” awards show. And congrats to all the winners.

My Missouri friends Brad Jones and Keith Enloe host this very fun podcast called “We Like That Too.”  They talk about wine, and favorite “things” and in general have fun. They came to Nashville a few weeks ago and ask if I would be their guest. And I had such great fun talking to those two. The podcast is out right now, and you can listen to how good a time the three of us had right HERE. Enjoy.

I got a note from my talented Australian friend Angus Gill letting me know that his Christmas album “The Gilly Season” is out today and is getting favorable reviews. One of the songs they seem to like is the funny one we wrote together called “Cheapskate Christmas”, and idea Angus brought to our online writing session a few months ago. Everyone knows someone like the lady in this song at Christmas time who pinches her Christmas pennies. Click the link above and be one of the first to hear it. Merry Christmas you cheapskates!

Even with that great news, I’m seeing a few more wearing masks here in Gulf Shores. With the flu AND Covid running around, I kind of get that.

And a new study suggests that those with high blood pressure risk getting COVID more than some others.

Now ashore in parts of Florida. Nice to hear it’s already downgraded to a tropical storm. Although it is blowing in places at 70 mph. Enough wind and water on tap for Disney World and Universal Studios to shut their gates today. Although some Disney visitors would probably think it the storm was just some special effect Disney added to their visit.

Online sales tomorrow with discounts on Amazon at Walmart and other places. Let the early Christmas shopping begin. With that, how about a “Black Friday” joke?

A husband says, “It’s Black Friday, and I just got the newest iPhone for my wife. I thought it was a good trade.”

It’s getting more and more expensive to compete in the NFL. Our Tennessee Titans approved a new 2.1-BILLION-dollar field for our football team. And some early renderings have finally popped up. Here’s what it could look like. 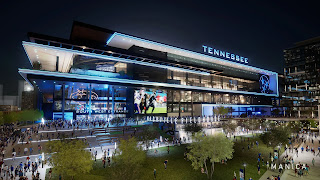 It do look cool. But I’ve seen just one game the entire time I’ve lived in Music City. Mostly because I enjoy football on TV. And because I’m not sure I can afford the parking fee, much less the price for an NFL ticket these days.

A new study says it will cost parents around $150,000 now to raise a child. And that doesn’t factor in recent inflation which would make that number even higher. And then you have one, they hit the teenage years and start talking back to you. Geez. But at least we paid for those wonderful moments!

My parents raised 5 children. Wonder if they ever huddled together and whispered, “what we thinking”!?

I have two shows here at the Frank Brown Songwriters Festival. The first is at 5 pm at the Woodside Restaurant that was to be a show with me and Brent Burns. But Brent is still trying to recover from that flu bug so they have Trick Savage, who I will meet for the first time joining me today.

Steve Dean and Victoria Venier will be arriving while I’m doing that show, then the three of us will do our first show late tonight at the world famous Florabama in the Main Room at 10 pm. 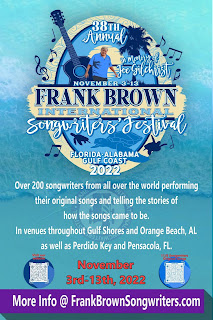 Gonna be a full fun start to the festival.