And a good Monday morning to you from the Villages in Florida. You did set your clocks back right?

Man, what a busy, fun weekend I had in Key West as we went through the sun filled weekend and put the wraps on this year’s gathering of Parrot Head fans at MOTM (The Meeting of the Minds) 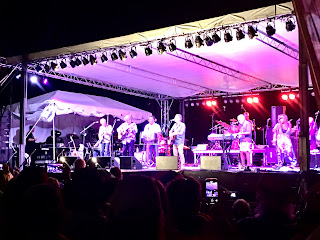 Friday morning I was on a boat with Brent Burns and Stoney Gable that set sail off Key West Harbor with a boat full of VIP Parrot Heads who signed up to join us on a comedy cruise. Stoney did 45 minutes of funny songs and then Brent and I did our thing for an hour and a half. 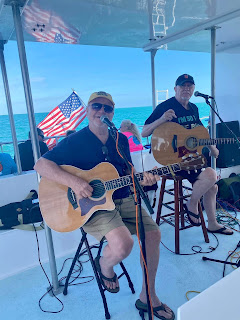 And the boat was indeed a rockin’ as folks were into it. And why not with the beautiful views we had out on the water Friday morning. So much fun. We sailed from 9 AM to 11:30 AM before we hit the dock again and got everyone off the boat. Thanks to TRMA for having me, and thanks to all of you who signed up to sail and laugh with us.

I had the pleasure introducing one of my favorite songwriters of all time, Mac McAnally on stage. And we had some time to chat. Mac is a Coral Reefer along with Eric who played drums for Mac, part of Jimmy Buffet’s band for a long while now. Mac told me Jimmy is doing well and expects to be back at it again next year after Doctors ordered him to get some rest. Good to hear he’s doing great. 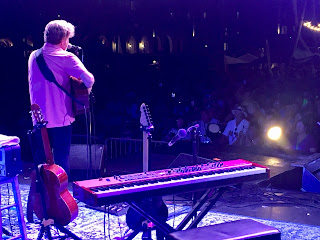 Mac is a master storyteller. An award-winning musician, and songwriter and producer. Multi-talented doesn’t cover it. And he’s an approachable down to earth storyteller to boot. Mac’s one hour and 15-minute set flew by in front of a beach full of fans who were singing along in the moonlight. Quite a sight, and sound.

I could not begin to pick a favorite Mac McAnally song. But I do love “It’s My Job” that talks about the jobs we all do, and the job Mac has.

It was a pleasure to be in his company a bit Friday night.

My last day in Key West was busy as I not only emceed one final day, but also played music on the beach as Kelly McGuire’s guest on his songwriter series. Pretty amazing setting as you’re on stage with the ocean at your back and Parrot Heads sitting in front of you on perfect day once again. Thank you Kelly for having me! 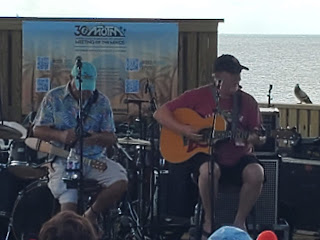 And the night closed out with Jimmy Buffett’s band doing their thing on the big stage, singing ALL those songs we all know.  You should have heard the crowd singing along on Volcano!  “I don’t know, I don’t know…” 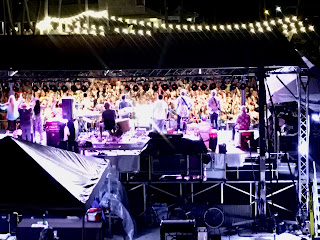 My thanks to Rob Hill and the TRMA committee for having me as one of their main emcees this year. I had a blast. Next year for the first time this show thing will move north to Gulf Shores, Alabama, one of my favorite places. And it’s a closer drive!  See you there. “Phin’s Up.”

I made the 7-hour drive or so from Key West to the Villages where my brother Gary and his wife Kay live. I’ll be in a golf cart this morning with him, not playing as I’m dangerous with a club in my hands, but just enjoying the ride. Then later I’ll get the nickel tour of this massive place in Central Florida. I’ve already figured out that it’s a challenge when you drive in here to miss hitting a golf cart. If you can’t find a golf cart to buy?  They’re all here.

1.9 billion. That’s what it’s worth. Wow. Surely I’ve got the winning ticket this time. Surely. Or maybe I should have spent my betting money on the World Series.

Mattress Mike won 75 million on the Astros winning the World Series. Largest sports betting payout in history. Astros beat the Phillies. I had no dog in the hunt, nut I do like Dusty Baker, so I was happy to see him get his ring.

The toothpick won!  And so did that Mattress Mike guy. Big time. He bet 10 million, won 70 million.

I don’t think my wife’s reaction would be all that great if I told her I was going to bet 10 million on a game. Pretty sure.

Some experts are now predicting a 20% drop in home values in Nashville. They keep predicting that, but if you check, it ain’t happened yet. Still through the roof. Literally.

Meanwhile folks are leaving expensive cities. San Francisco is the “most left” right now. Where are they going?  Miami is the #1 destination followed by Sacramento, San Diego, Vegas, and Tampa. After just driving through Miami? They already have enough folks! And they drive CRAZY!  Must be the Cuban coffee. I felt like I was in a NASCAR race driving through and around it yesterday.

A guy just pawned his USED casket for cash at a shop in Aurora, Colorado. You can now buy it for $499. Used.

She just announced she’s in a relationship with a 36-year-old dude. Cher is 76. As the song “Retired” says about that, in the song I wrote with Brent Burns, “If he dies…he dies”.

Just inducted in the Rock n Roll Hall of Fame the other night. And on the high heels of that Dolly says she’s going to record a “rock” album. Is there anything she can’t do?  She did announce she will tour no more as she wanted to spend more time at home. But she is going to rock n roll us in the future. 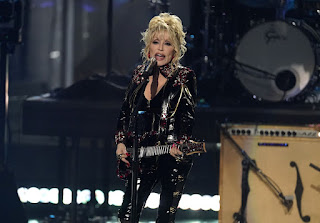 This sign was posted outside a home. It should make the bad guys stop and think.

“This Home Protected By The Good Lord & A German Shepherd. If You Come Here To Steal Or Do Harm You Might Meet Them Both.”

“Please Don’t Lick The Psychedelic Toad, National Park Service Warns.” Yes, they had to WARN people. I do wonder what goes through a mind that makes one think, “Ya know, I think I’ll go lick a toad today”.

Off to follow my brother around on one of a TON of golf courses here at the Villages before moving into Gulf Shores, Alabama tomorrow to gear up for this year’s Frank Brown Songwriters Festival.