Hump Day-Wednesday-All Day. We’ll reach 45 today and drop below freezing tonight to 26. I’m putting the trap door up on my PJ’s.

I spent the day trying to feel better while battling COVID. I had tons of sleep, and when I get sick like this I tend to unload the medicine cabinet. Cough, sore throat, runny nose, headache and EXTREMELY tired all the time. I’ve been in bed more than Hugh Hefner these past 3 days.

If it ends in “Quil” …I’ll take it. Dayquil, Nyquil, Mid-Day Quil, Morning Quil, Arbor Day Quil…you name it.  My wife has been nursing me back to health and of course I’m hoping she won’t come down with it now, or anyone I may have been around. We’ve also got a great circle of friends who have been in touch offering ideas and help too. Most of us have dealt with it, and more to come. It ain’t fun that’s for sure, but I do feel like maybe I’m feeling just a little better this morning, and I’ll take that.

This good news may be part of the reason that I think I’m feeling better this morning. We got word that the album “Almost Proud” by the legendary bluegrass legend Del McCoury is in the final ballot for the Grammy Awards for Best “Bluegrass Album of the Year” for his album "Almost Proud". I have a song I co-wrote with Josh Shilling that’s on this album titled “Once Again” that was the first single off this project now officially Grammy nominated. So proud of that. And so thankful for my extremely talented friend Josh Shilling who walked into our writing room a couple of years ago with part of a chorus that le to this song that he got to Del. In fact, when you listen to it, listen to the piano part…that too is Josh. 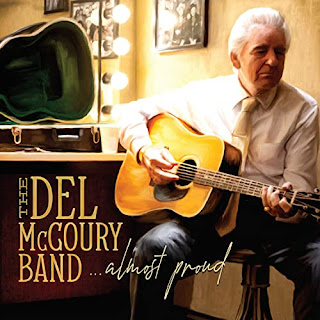 I think most music artists will tell you that it’s the Grammy Award they covet the most over every other award. Grammy’s go to what they consider to be great music, not particularly the “most popular” music, and there’s a difference for sure.

That little Grammy Award that you see is made in a little shop out in the little town of Ridgway, Colorado where True Grit was partly shot that I’ve had the pleasure of visiting. The owner and creator John Billings  is very nice and cool dude. He gave us quite the grand tour of the tiny place when I was in Colorado for a Veteran's event a few years ago with my buddy Steve Dean. 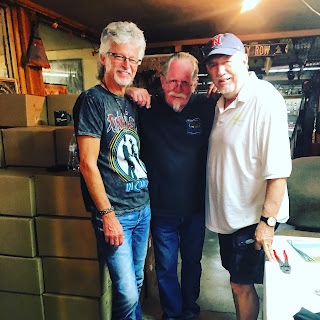 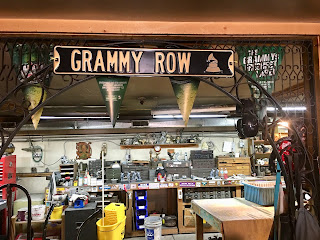 Now, that trophy go to the artists. Not the songwriters who wrote songs for the album The songwritera, are allowed to get a Grammy Certificate to hang on their wall like this one that I was fortunate to be part of when my friends Hillary Scott & the Scott Family won the Grammy for “Best Contemporary Christian Album of the Year”. What are the odds that I might get to hang another one alongside it? We’ll see. But gosh what a great honor to be on the final ballot. 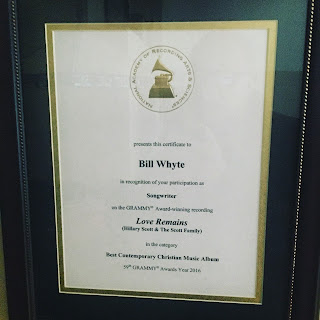 By now we know that math scores and grades period dropped significantly for 4th-8th graders during the pandemic. This morning a news article tells us that was not the case for those enrolled in Catholic Schools. Most of those did not shut down. Their scores remained on par, and in some cases they actually went up with those schools in session.

WITH TIME TO KILL

I’m wearing out my TV on the couch being sick. I did check out “Tulsa King”, with Sylvester Stallone. Taylor Sheridan is producing this streaming series on “Paramount+…the same Taylor Sheridan who’s producing the runaway hit “Yellowstone” with Kevin Costner. Pretty good if you like Sly Stallone. Here’s the TRAILER.

A new study reveals that auto emergency breaking can cut crashes by over 40%. I’ve got some of that kind of smart technology on a Toyota RAV I bought this year but have not yet fully studied the manual to see what all it does on it’s own. I tugs on my steering wheel when I drift to close to another lane, and that’s taking some getting used to. With automatic drive there’s a feature I can kick in that automatically keeps me a safe distance from the bumper ahead. When that cars pulls into the slow lane, it resets to the speed I dialed in.

And the other day the brakes kicked in HARD when I didn’t hit them hard enough myself with a car checking up in front of me. So yea, I’ll bet it does stop fender bender accidents and more.

I haven’t had a deer leap out in front of me yet, but I’m betting the braking system takes over when that happens too.

The cost of a Butterball will be up 23% this year. Wow. Our kids will be coming for Turkey Day. I hope they’ll be fine with trying to find the wishbone to pull in a can of Hormel Spam.

While that news was announced, Wal Mart is saying it will keep it’s Thanksgiving prices the same as last year in order to help families battle inflation. I’m betting the Walm Mart Greeter will be busy with that news.

I think I’ll avoid having Christmas at Disney World. Can’t imagine what a Turkey Day meal over Christmas would cost there as they just announced they will raise their ticket price for the Magic Kingdom over the holidays from $124 to $189 per person! The parks get overcrowded still during that time…so up go the prices. “It’s A Small World” don’t come at a “Small Price” no more.

To the state of Georgia who has come up with an idea to help handicap folks get out and see the nature in their state parks. The now have all terrain wheelchairs that one can use for free to allow them see what everyone else sees. Great idea. Another sign that there’s a lot of “good” going on in the world that doesn’t particularly get the press the bad news does.

CHECK YOUR HOTEL ROOM BEFORE LEAVING

Maids and housekeeping find the weirdest things when they go in to make rooms up. Here are 3 of those.

Underwear, lots of underwear. Everywhere. One maid said she found what she thought was a tiny piece of cloth on the bed. Nope. Thong.

One housekeeper walked in to find a dead elk on a tarp during hunting season.

And yet another found false teeth that was left behind. And the owner never reached out to reclaim them.

Steve Jobs, who founded Apple and passed several years ago now just had his sandals put up for auction. They sold for $220,000 bucks.

CHEAPEST PLACES TO RETIRE OVERSEAS
Money Magazine just put out a list of places one can retire overseas for less than $2,000 per month. The number one cheapest place is Portugal, which is beautiful, I hear. One can live for $977 according to Money.

The other places are:

Wedding Ceremony Delayed Due To A Pair of Fighting Kangaroos. (You just can’t send them an invitation and expect them to behave)

Another day of just resting up and working at feeling normal again.