Monday has rolled around again.

A very quiet weekend here at the Whyte House but it’s a little lull before a storm as this week will be busy in the studio with Brent Burns as we record the last songs for his upcoming albums. We’ll have 7 or 8 more co-writes together on this yet to be named project that should be out by November. There’s some great beach songs like “Too Many Beaches To Go” and certainly some funny songs again, one of those that Brent wrote by himself that could be the fan favorite from this new CD titled “Dead People’s Clothes”. Wait until you hear.

I did consume a ton of football this weekend. The NFL started its full season yesterday. I root for 3 NFL teams. The Bengals, The Packers, and the Titans. I went 0-3. I’m off to a great start.

My bluegrass friends Darin & Brooke Aldridge shared a surprise on their social networks that made me smile when I saw it. They were in the Nashville Airport and at one of the shops there on came their song we wrote together “Grand Ole Circle”! That kind of stuff will get your attention. Here’sthat moment which is cool. And here’s the entire VIDEO of our tribute to that 6 feet circle of wood that's located center stage at the Grand Ole Opry in case you haven’t seen it. It’s kind of a nice promo of one of the reasons so many tourists come to Nashville.

A sign that we’re moving on?  Washington will end the COVID-19 state of emergency on October 31.

There’s a lawsuit that is seeking to ban enforcement of vaccine mandate on tribal land in Montana. Yep. Somehow, I don’t see the John or Rip or any of the Dutton’s on “Yellowstone” requiring the ranch hands to roll up their cowboy sleeves. Anyone trying to enforce it will probably be taken to the train station.

2/3rds of the world has had the first vaccine shot. But in the United States alone, the new numbers show that only ¼ of us have had any booster shots.

Turkeys are going to cost us a lot more this year for Thanksgiving. That’s because of a disease that swept through turkey land forcing turkey growers to get rid of a lot of turkeys. No word yet from Butterball if the turkeys had their booster shots or not.

FOR YOUR MAN CAVE

Check ou these Beer Deer and Fish and other game that a company makes out of beer boxes. If you don’t want to go out in the woods in blaze orange and shoot a real deer, then this might be the option for you. You don’t have to hang anything in a tree and clean it, you just have to clean out a couple of cases of your favorite beer. Who thinks of these things?  And they are apparently selling out routinely. 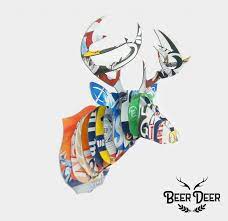 So, would a Christmas Rudolph Beer Deer be too insensitive?

A woman shared that when she was pregnant that “a coworker told her me I looked like Mother Earth. The person meant it as a compliment”. Uh…not so much. We’ve probably all done things like that. That’s why I keep a saltshaker handy for my foot in case I stick it in my mouth.

I remember when I was young my band was playing a gig in my little hometown of Montgomery City, Missouri. I can’t remember why, but a local preacher was to come on stage and either introduce the band or say something about something. So I gave him a big introduction of “Please welcome the bastard” instead of “please welcome the Pastor”. That’ when I bought that saltshaker.

A study now tells us that if we eat a big breakfast and a light dinner in the evening that it makes no difference as far as weight goes. Calories apparently are calories, no matter when you eat them. All I know is that my diet of big breakfast AND big dinner is not working…clearly.

WHY DID IT HAVE TO BE SNAKES?!

Okay, I’m in for this one. Indiana Jones 5 is on the way, the last one we’ll see Harrison Ford playing the lead role of Indiana. Check out the trailer for the movie.

It’s political yard sign season. I try to stop, and spray Round Up on every one of them I see to no avail. Anyone who knows me knows how much I despise politics. So I’m not a big fan of those kinds of yard signs. However, if I ever lost my mind and put a political sign in my yard it would be this one. If you like theme parks, you could easily stay in Orlando and not be able to get on every ride and attraction they have. Now Universal Studios has announced plans to add a 4th theme park there, to go with the 4 Disney World already has. This 4th theme park at Universal will DOUBLE their size. No rides have yet been announced, and no opening date set yet for what they will call “Epic Universe”. I see yet another trip to Orlando coming.

Mammoth Cave, not far from Nashville up in Kentucky has found another 6 miles of that cave. That means the world’s longest cave is 426 miles long. And as many times as I’ve passed the exit, I’ve never once stopped and gone down into the hole…yet. It’s not a big draw for me personally, even though I’ve been in a couple. But I do love the word “spelunker”. I have got to figure out how to get that into a song somehow.

AND ONE LAST ATTRACTION

If I’m ever in Oklahoma City, I’ll have to stop at the banjomuseum. Yes. They have one. Since I now write a lot of bluegrass songs for my publishing company, I’ve learned to love them and their sound. But they’re not everyone’s favorite instrument. In fact, they’re the butt of musical jokes. There are a LOT of banjo jokes.

What’s the difference between a chainsaw and a banjo?

Answer: You can tune a chainsaw.

What’s the definition of a successful banjo player?

Answer: A guy whose wife has two jobs.

What’s the definition of an optimist?

Answer: A banjo player who has a mortgage.

A parent tweeted this. “I accidentally asked my coworker if they needed to potty before a meeting. I have to find a new job now.”

I’m picking my pal Brent Burns up at the airport. We’ll be beating songs up a bit today for his new Beach Song-Comedy Song album and producer Dave Frances will sit down with us this evening to chart the songs we’ll be recording starting tomorrow morning. I’m wearing flip flops and shorts all day to get in the proper mood.