Rhyming With An Aussie..."Patsy"...Surfing in Wisconsin

It was the first time I had written with Katrina Burgoyne yesterday for a while. She and her now hubby Steve had a wedding, a honeymoon, and several projects to take care of. Steve shoots videos for a lot of country and bluegrass stars, and shoots several for Billy Blue Records who I write songs for. Kat stays busy playing shows just about everywhere, but her schedule eased up enough for us to get an idea started that we’ll finish up later. Katrina is from Australia, so some of the fun we have comes from me getting to hear her accent. I’ve gotten used to being called “mate” now instead of Bill. 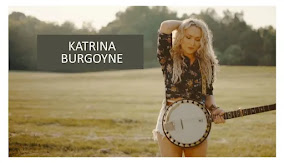 The husband-and-wife team of Adam and Amy Pope recorded a song that Adam and I wrote, “Tonight I’m Playing Patsy.” That was an idea Adam brought to the writing room the first time we met. He and Amy released it as a single after my friend Darin Aldridge just nailed the production in the studio. The publication “Saving Country Music” wrote these wonderful words about our song.

“Traveling husband and wife duo Adam and Amy Pope have turned this stellar little classic country tune paying tribute to Patsy and the timeless theme of heartache that’s just screaming for the attention of country fans”.

Thank you, Saving Country Music. And if you’ve not heard the song, here you go. Congrats to my friends Adam and Amy for the spotlight they’re getting. 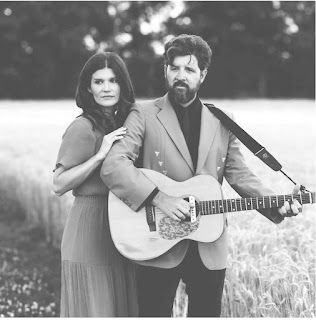 TC Cassidy, another singer from Australia) ) and known as Tania Cassidy by some, is about to release her album “Traveling Hearts” produced by my Aussie friend Angus Gill. TC was quite the star down under many years ago and this is her official “comeback” thirty or more years later. Angus convinced her to get back in the studio and the result is this great new album. Right now she’s talking about each song on the project, one song at a time. Yesterday she talked about her current single that I wrote with Angus, “Love Hate, LoveAgain”. Check out what TC has to say about the song here.

And the song is sitting at #7 now on the Australian Country Chart right now. Awesome. 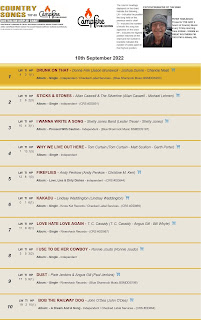 A survey of 3,000 folks reveals that 37% of them say they are traveling more now than they did pre-pandemic. And that they don’t think masks, COVID tests or sanitizer is important enough anymore to pack in their suitcases.

Dr. Ashish Jha, the White House’s COVID-19 coordinator got a little heat for saying we can take a COVID booster shot, and the flu shot together saying that’s “why God gave us two arms”.

The NY Daily News printed a list of weird things one can find in each state this morning. I had to look. In the states I’ve live in:

Until 1969 the official language of the Illini State was “American”, not English.

In 1897 there was a bill introduced to round up the lengthy decimal value of pi. (too complicated for me to understand)

My home state has a nickname. "Cave State" because it has so many of them.

The Cleveland Cuyahoga River once caught on fire. (That led to a lot of comedy breaks on my radio show at the time)

Mountain Dew, the soda originated here. And its slang term for moonshine, that they now sell legally in the state.

Sheboygan, Wisconsin is renowned for its surfing. So much so it’s been dubbed “Malibu of the Midwest”. Never did that. But it’s also the brat capital of the world too and I’ve eaten my share of those at Wisconsin tailgate parties.

I read this morning that for the second year in a row there will be no skiing on Sandia Peak in Albuquerque, New Mexico. Staffing shortages, weather, and financial problems are being blamed.

If you’re ever there, take the tram up to the top of thepeak. Beautiful. It’s where I learned to ski. Okay, to be honest, it’s where I learned to fall down. Several times. I destroyed a picket fence once. Left a hole in it and knocked down a row of skis that were leaning on the fence. I don’t wanna talk about it.

Yesterday there were articles telling us gas is about to go below 3 bucks a gallon. I saw one pump at $3.03 per gallon yesterday in Nashville. Now some are suggesting if things would fall into place perfectly that we could see a dollar and something gas again. Okay then. Bring it on. Of course when it does, some will sell their little micro-gas-saving-cars for gas guzzling pickups again. It’s like you need two vehicles. A small one to save money, and a big one because, well, you just like a big one.

I’m writing with the ole “Georgia Quacker” Gerald Smith again. Gerald used to be on Hee Haw doing his “quacker” thing, and last week I got to watch the “Brotherly Love” quartet record their DVD concert for their new project in that studio. First time I had been there. It’s part of the Opry building, and I had no idea it was located there. So, I’ll have a chance to let Gerald know I got to see his old studio home. Should be fun.