Friday morning in Gatlinburg getting ready for a songwriting session and a couple of shows tonight here at the Gatlinburg SongwritersFestival. 81 for the high today with some rain here today in the mountains.

I picked up my “Hits & Grins” buddy Steve Dean and we hit I-40 East all the way to Gatlinburg. Rolled into town and stopped at the historic old Gatlinburg Inn and picked up our credentials, checked into our rooms a little further down the street and got set for the first activities.

First activities included a meet and greet followed by opening ceremonies underneath one of the ski lifts here. The put songwriter Kim Williams who wrote a TON of Garth Brooks hits into the Hall of Fame here. His wife accepted on his behalf as Kim passed away a few years ago.

I never wrote with Kim, but I’ve written with his talented daughter Amanda several times and I’ve had the pleasure of hearing all the Garth and Kim Williams stories. Kim wrote with Garth when he was a nobody and some of those songs they wrote back then, “Papa Loved Mama”, “Ain’t Going Down Til The Sun Comes Up” and others. And he wrote the great song “Three Wooden Crosses” that Randy Travis turned into a big hit. His co-writer Doug Johnson performed the song. Kim Williams was in a fire that just tore up 80% of his body. Scarred his face. He had over 200 operations in his lifetime, but he never complained about it. He just wrote, every day.  They could not have honored a more deserving person.

After that I hosted three songwriter rounds at the Gatlinburg Inn. 4 songwriters came in and played their songs, then 4 more, then 4 more. Very informal.  And even my friend Randy Brooks sat down and sang a song. Randy wrote “Grandma Got Run Over By A Reindeer”.  And I even made another friend Wil Nance treat those writers to his great song “Go To Hawaii On Me” that both Chris Janson and now Joe Nichols have recorded.

So a big first day, with an even bigger day on tap today. More on that at the end of today’s blog. 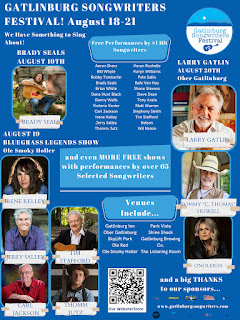 The folks here at the Festival just released a little question and answer interview that they did with me to help promote the songwriter’s festival. If you’re curious, here’s that written INTERVIEW.

My songwriter buddy Tim Stafford was to be here this year, but I found out last night that both he and his 95-year-old Mother BOTH came down with COVID. Hate that. Word is both are doing well. Get better you two!

This is the 2nd year of this Festival. Last year I saw a lot of masks. This year?  I’ve hardly seen one. In fact, I don’t know if I have seen one yet.

Researchers in California did a COVID study on a small sample group of 210 folks. 50% were unaware they had the Omicron variant of COVID. Hard to quarantine when you don’t even know you have COVID.

In Myrtle Beach TWO people were bitten by sharks in separate incidents. While out in Colorado, a big bear woke up a family in their home, got very close to the husband who had to fire 9 shots from his gun to bring the bear down and save his family. There are a lot of bears where I’m at. I’m hoping my guitar will be enough to bring one down if I get in that situation. Geez.

I had no idea that Google has an app that will allow you to amplify sounds. If you’re hard of hearing, it can amplify voices of those around you. That’s got to be an improvement over the app that I have that will say “HUH?” loudly to folks I can’t hear or understand.

American strippers are apparently starting their own union. True. That should be an interesting picket line if they ever decide to strike. And would you cross it?

I don’t get the whole crypto-bitcoin thing. I just don’t. But I saw its value has dropped a ton on the market. Pretty sure that’s happened because the tooth fairy’s refuse to leave bitcoins under a child’s pillow.

I didn’t read the article with the headline, “How To Dispose Cooking Oil The Right Way”. I didn’t have to. I know the answer. You don’t. You put the used grease and cooking oil into an empty Folgers coffee can, set it on the back of the stove, and use it over again. Just like my Mom did. You’re welcome.

“Snake Bites A Toddler And The Two-Year-Old Keeps Biting Back Until The Snake Dies”. Can’t wait for that movie at Halloween.

A busy Friday here at the Festival. At 9 AM this morning I’ll be in a group songwriting session with my friend Brady Seals. Folks signed up to rhyme with the two of us! 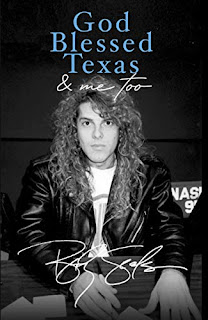 Then at 6 pm I play a songwriter round at the Park Vista Hotel with Victoria Venier and Dana Hunt Black, followed by an 8:30 pm “Hits & Grins” show at the Listening Room in Pigeon Forge. 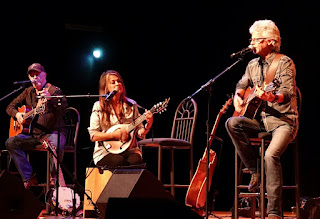 A very fun, busy day ahead.