Monday morning back home in Nashville. We’re at the very end of August. Hard to believe. College football games were on Saturday, a sure sign Fall is on us…even if the temperatures are still in the 90’s here.

Friday in Little Rock I wrote with an 86-year-old veteran named John W. “Doc” Crawford at our Freedom Sings USA retreat. Doc had a different kind of military story. He’s in the Airforce for 8 months when he gets a notice that he’s college exempt. He didn’t know it. So he’s out of the service and onto being a literature major, a teacher, a poet, a musician and more. The 8 months he did serve? He did KP duty. And he cooked.  So it gave me a chance to write something lighthearted with him, which does not happen a lot because a lot of the military stories are stories of combat and the result of combat, loss and much more. For instance, Minnie Murphy, one of our other writers, sat with a woman who lost her husband in the incident that inspired the movie Blackhawk Down. He was on the chopper.

So it was nice to be able to have written something fun called “KP Duty” with Doc to help lighten the mood a little Friday night when all the songwriters sang their songs with the veteran, they had just written about sitting next to them to be honored by the crowd. Doc was right beside me when I sang “KP Duty and he had the crowd clapping along in time. It was a moment. And I have had several of those moments now getting to do this thanks to Freedom Sings USA. 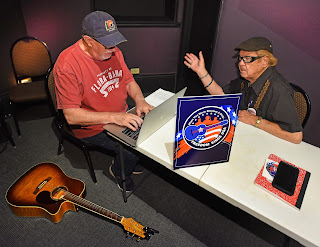 Bobby Tomberlin, Steve Dean, Wood Newton, and Minnie Murphy all did outstanding jobs writing with their veterans as well and it’s just amazing to sit behind the crowd and watch each songwriter do their thing with their veterans next to them. The veterans will hug our necks, tell us their personal stories, and say thank you. No, “thank you” for your service. It’s just an honor to be able to honor you.

And…we look forward to coming back and doing it again with some other veterans next February 17 & 18. 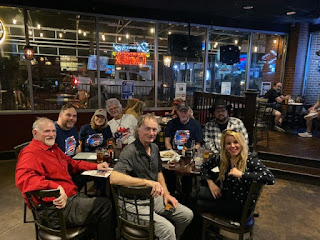 Bobby Tomberlin and Wood Newton loaded their guitars and suitcases in my car, and we made the trip back to Nashville that took about 5 hours. 5 hours go by quickly when you get to hear so many great music stories from those two. The songs they’ve written. The people they’ve been round because of music.

And the good news is, we’ll be coming back to Little Rock next February to do it all over again.

I’ve always thought a book that collects the best “road” stories from country stars, singers, songwriters etc. would be a very fun read. And every single road trip I’ve been on, there’s always been a memorable story shared by someone during the ride to the gig. This one came from Wood Newton who was on the trip with us home from Little Rock when he admitted to me and Bobby Tomberlin that when he was young, he drilled a hole in turtle’s shell, knotted a rope that fit into the shell, and then would walk his turtle! Bobby and I looked at each other then laughed at the insanity of that. I joked that walking a danged turtle would NOT burn many calories. It’s a slow walk folks.  One more story for that book.

Before you think my friend, Wood is crazy, he pales compared to this girl caught on camera in Philadelphia walking what she calls her “emotional support” alligator. Uh huh. Maybe Wood was ahead of his time and was walking an “emotional support” turtle. I’ll have to ask. 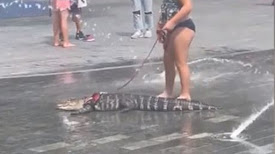 Moderna is suing Pfizer and BioNTech for infringing on their patents.

1,300 NYC school teachers must vaccinate within the next little bit, or they will lose their jobs.

No more free in home COVID tests is coming. The governments has apparently run out of funding for them.

Ozzy Osbourne is saying that he’s moving back to England. Too much violence here for him and he says he does not want to die in America. He thinks we’re crazy. Maybe. But this is the same guy that once bit a bat’s head off in concert. Who’s bat crazy? Enjoy your fish and chips Ozzy.

LastPass, one of the world’s largest online password managers just got hacked. And it’s not the first time. They’re saying their 25 million users are safe. But it’s not a good thing that your password manager service that exists to protect your danged password can get hacked. That means the hackers hacked the password of the password protection company? My head hurts thinking about it.

All eyes on the stock market today as it dropped like a stone on Friday. Down over 1,000 points. However, shares of Maalox went up. So there’s that.

This made me smile when I read it. “If you get lost in the woods, talk to yourself about politics. Someone will show up to argue with you.”

It’s National Cinema Day next Saturday and some select theaters, including some in the Regal line, will be selling movie tickets for $3. So, if you’ve yet to see Top Gun Maverick or the new Elvis movie?  Here’s a chance to catch em’ cheap.

I’m in writing a Christmas song with my friend Jerry Salley at my Publishing Company. The record label Jerry runs, Billy Blue, is going to release a bluegrass Christmas album this season that will feature various bluegrass artists. So we’re going to see if we can’t write a Christmas song that might fit one of the groups or singers that will be on this project. Fingers crossed.