Mac And Cheese Day...Armadillos...Shows Ahead

Somehow, I had not been in a dentist chair for a long time. A way too long time. I paid the price for that bit yesterday as I think my chair-person used heavy strength industrial tools to chip away what needed to be chipped away. I did okay. Outside of whimpering quite a bit and leaving fingernail marks on the armrest…I did okay. I’ll be seeing my lady behind the paper mask a little more often from now on.

I caught our Nashville Sounds on a balmy evening playing the Memphis Redbirds at our beautiful ballpark with the best scoreboard in ALL of baseball, in the shape of a gigantic guitar. Add to that the mascot race featuring Reba, Dolly, Johnny Cash and George Jones and how can you not want to go catch a game? If you’re a baseball fan like me and you come to Nashville? You should most surely check out our little baseball park. 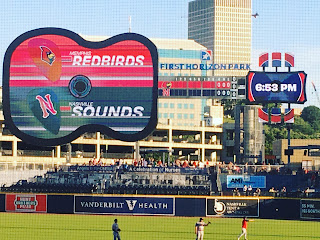 And then driving home I could not miss the HUGE super moon hanging in the sky. Kind of breathtaking really. Hope you saw it too. That’s the kind of moon artist Michael Johnson must have been thinking about in his great song “The Moon Is Still Over Her Shoulders”. Really gorgeous.

The FDA authorized the Novavax vaccine for emergency use yesterday giving Americans an option and an alternative to the mRNA vaccines that folks have been taking. Officials are hoping that might appeal more to those unvaccinated. Will it?

Here’s the ping pong of vaccines. The White House is committing to ensuring access to boosters and testing because the new variant is spreading. At the same time Rand Paul says the latest variant has been “sensationalized”. Pick a side.

10 players for the Kansas City Royals are not vaccinated and will not be with the team when they play Toronto over the next few days because of Canada’s “got to be vaccinated” restrictions.

Is…National Mac and Cheese Day!  Yep, there is such a thing. Greatest food ever invented. I have no idea if they have a Miss Mac and Cheese from a pageant or not. They should. Yellow cheesy sash draped over her shoulders and tiara on her head made from elbow macaroni. I like it out of the box, I like it in milk, I like it baked, I like the Panera and Chik-fil-A offerings too. My favorite is still a big pot full of elbows with a chunk of Velveeta stirred in. And if I ever go back to San Francisco, I am going to have to check out the Mac and Cheese restaurant they have there with all kinds of different choices. Happy Mac N Cheese Day folks. 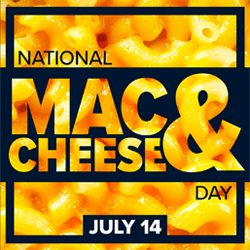 Yep, we got it. The June CPI inflation report tells us the largest price increases are in gas, butter, and flour. So essentially, I’m going to need an electric car, margarine, and less biscuits on my plate.

More proof of inflation. The AVERAGE rental now in New York City is reportedly $5,000 per month!  And they expect prices to jump again in the Fall. When I read things like this, I always wonder what in the heck people do for a living that allows them to shell out 5 grand for a danged rental?  They ain’t songwriters I’m guessing.

It do be hot. Really hot in the south these days. How hot is it? Well, the climate change folks are saying that armadillos are moving north. I have no idea if North Dakota will be putting up a wall to keep them out or not. Stay tuned.

The resurge in vinyl records continue. So many artists are releasing their new albums on vinyl again that yet another vinyl record plant just opened in Nashville. Still something magical about holding an album, sitting cross legged on the floor listening to it while reading the liner notes on the back. Hard to hold a digital download folks. Welcome to town Vinyl City.

Victoria Secret’s stock took a big hit yesterday when the company announced it laid off 160 management level employees. Wonder if when you’re let go by Victoria’s Secret if you get a lifetime supply of push up bras?

A bear wanders up to a school in Canada, getting too close for children. A quick-thinking music teacher grabs a trombone and gives it a couple of blasts and sure enough, the bear turns and runs way. A trombone. Who knew?  Next time I go hiking out west I’ll pack a trombone. Heck, cleaning out the spit valve might scare them too. 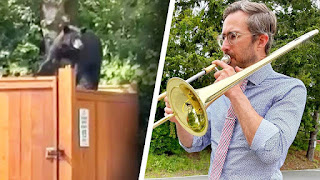 More and more cities are looking to convert their 4th of July shows to drone lit shows as opposed to traditional fireworks. Safer. Right now there’s more demand than drones available that do these kinds of shows. Fireworks create pollution and scare pets; a couple of reason cities are considering changing up their celebrations. Typically 100-500 drones are used to create shows that last 10-12 minutes. Costs about $25,000 to stage one of these compared to about $2,000 for small fireworks show. So there’s that. More drone-less bang. Don’t think I’d mind that in my neighborhood.

If you’ve not checked out my new-look website and look around. Check the “Tour” section to see where I’m going to be playing. The next few shows?

I’ve got a mini tour with Brent Burns.

And then July 31 I’ll be back at the People’s Listening Room in Mobile, Alabama for a comedy show with my stand-up friend Juanita Smith.

All the details for these and other show are right here on the website.

I’m doing an online writing session with an award-winning Trop Rock artist Donny Brewer who has a funny song idea he wants me to jump in on. Happy to do it.