Friday morning…bring on the weekend. It’s going to be busy, and hot. 93 today.

I jumped online and joined my Trop Rock friend Donny Brewer who was sitting outside his motorhome in Chicago. Donny and his wife tour and live in an RV traveling all over the country performing his beach songs to a large following he’s developed through the years. I met Donny several years ago through our mutual friend Brent Burns and Donny has booked me for a couple of his own shows that he puts on. I did his Karavan for the Keys a couple of times. The Karavan starts in Las Vegas and a bunch of folks will follow Donny in their motor homes to Key West.  I think this year and Donny will have 6, 7, 8 shows along the way to Key West for the “Meeting of the Minds” event that’s the largest gathering or Parrot Heads and Jimmy Buffett music type lovers in the world. It looks like Donny is going to put me in another one of those shows at the very end of October as I too make my way to Key West where I’ll be doing multiple shows as well as being the main emcee of the 5-day event…and that will be fun and an honor.

Donny reached out because he said he went to sleep and had a funny song idea and when he woke up, he said the first person he thought of was me for song. I quickly informed my friend to seek help if he’s waking up and thinking of me. But it was a funny idea, and we had a ton of fun making it funnier.

Donny is a talented musician, writer, producer and more and is a favorite of the Trop Rock enthusiasts winning many awards in that world. And he’s a heck of an entertainer too.  His most requested song might be “Skinny Beer” that he sings with another funny talented guy named Matt Hoggatt who’s in law enforcement in Mississippi of all things. Check the song out. Fun morning rhyming.

A young friend of mine named Taylon Hope who you see below sent me this picture of her holding a bag with the title of a song we wrote together that according to her note is getting a little airplay down at the beach near Charleston where she and her family are vacationing. So that was good to hear. Now I NEED one of those bags Taylon! 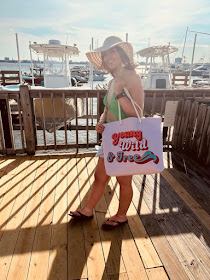 MSN reports that more than 1 in 2 Americans now live in an area where the CDC urges indoor masking to curb COVID-19 surges.

The New York Post printed an article that claims using a 3-dose vaccine approach to kids 6 months to 5 years shows no evidence of vaccine efficacy. And one CDC officer joked that “you can inject them with it or squirt it in their face and you’ll get the same benefit.”  No wonder only 2% of parents with kids under 5 have given their kids a vaccine shot.

Meanwhile, out on the west coast, LA County is poised again to mandate mask wearing indoors.

So a family sits down at a Waffle House in Texas, eat their “smothered and covered” and then promptly robs the place. And this is why Brent Burns, and I wrote this funny song, “Midnight At Waffle House.”

This does look cool. Waylon Jennings widow Jessie Colter (“I’m Not Lisa) has produced a documentary titled “They Called Us Outlaws” which covers that period when “Outlaw Country” showed up on the country charts with Waylon and Willie and Kris and Tompall Glaser and others. Artists who wanted to record music the way they heard it, and not have a label or a producer making the final calls on their music. It changed the way Music Row does business and we got a lot of great music from that movement. I’m in.

Dolly Parton is the richest woman in music. Smart business woman. And her new venture I’m sure will make money too. She’s offering up canine clothing. That’s right, clothes for your dog. And the clever name of the company?  “Doggy Parton”. Folks love their pets. A lot like to dress them up. I have no idea what the dog is thinking when suddenly, their owner squeezes them into a mini-Harley-leather vest. I wish they could talk so they could comment.

A little known, kind of funny fact here. A company in the 90’s made pencils with a slogan on them that read, “Too Cool To Do Drugs.” They had to be recalled. Why? Because when folks sharpened those pencils, the slogan turned into “Do Drugs.” And it seemed like SUCH a good idea at the time.

DON’T GO IN THE WATER

What’s with sharks showing up more and more? New Jersey just had its 5th shark attack in one week. Anybody else hearing that ominous Jaws music now?

One of the questions asked when folks apply for a sales job comes from a boss who will say, “try and sell this to me”. Leonardo DiCaprio did that in a scene from “The Wolf On Wall Street” with a pen. (No…the pen did not say “Too Cool To Drugs”.) This boss asked a potential employee to sell him “this computer.”  The sharp employee took the computer from the boss, tucked it under his arm and took it home. Eventually that bossed called and said, “bring back that computer now!”. The interviewee replied, “For $200 it’s yours.”

A very full Friday on tap. I’m off to write with Steve Dean, and yet another Trop Rock artist Aubrey Wollett who’s in town to play a big show out on a nearby lake this weekend so we’re putting our flip flops and guitars on this morning.

Then this evening I’m going to be in the TV studio audience to watch Darin and Brooke Aldridge sing our song “Grand Ole Circle" on the Mike Huckabee show. That should be fun too, and when I find out I’ll let you know when you can watch it.  The tomorrow Darin and Brooke and their great band are performing “live” at the world-famous Station Inn here in Nashville and I’ll be taking that in as well.

You have yourself a great weekend too