Monday morning in Music City with a high of 47 on tap to start the week.

My wife and I watched our daughter Heather and her husband Casey roll out early yesterday morning for a long trip to Baltimore where they will catch a plane to Germany where they will based for the next 3 years with the Army. Casey is a pilot and will be flying whoever needs to be flown to wherever they need to be flown. Officer, dignitaries and the like. We got to have them at our house for 5 days during the transition and enjoyed every bit of that. Even got to watch my daughter try to figure out how to hit a golf ball off the tee.

So while we already miss them, we are looking forward to going overseas ourselves to visit them and see some of Europe while they are stationed there. Quite the adventure they’re on now.

After living many years in Cincinnati I’m on the “Who Dey” train right now with Joe Burrow and company. I covered a Bengals Superbowl in Miami when I was on air at WUBE Radio in Cincinnati. Bengals-49’ers game where Joe Montana made THAT drive at the end and broke every Bengal fans heart. So here’s hoping the Bengals can get back to the Super Bowl back-to-back years and win this one! They face KC next week. Can they beat that great team four times in a row…and on the road?  We’ll see.

And in the NFC the Eagles & 49’ers should be a great game. If I had to bet on who’s winning the Super Bowl this year?  While I’m rooting for the Bengals, that 49’er defense is tough to overcome so I’d probably lean that way.

Today I’m featuring the song “He’s A Coming” that I wrote with Lisa Shaffer and the “Georgia Quacker” Gerald Smith. Darin and Brooke Aldridge recorded this up-tempo bluegrass song that was Gerald’s idea. We gathered at the publishing company Gerald wrote for at the time just off Music Row and wrote a song and when that was finished he played the two of us a start on this song “He’s A Coming”. I loved it immediately but we didn’t have time to write it that day so set a second appointment. Before that writing appointment happened I dug into what Gerald had and wrote a couple more verses for it that both he and Lisa liked when I played it for them. So it did not take long to finish it up on that second appointment. And then Darrin and Brooke did the song more than justice.

And today I am thinking about my friend Gerald Smith as he’s in the hospital and has been there over a week now. Prayers are most certainly needed. He’s got mine for sure.

China now says 89% of their population have been infected with COVID. A lot of that population wears masks. Makes you wonder how effective those are when you look at the number infected there.

Researchers say that long COVID can make your hangovers much worse. A double whammy there.

Some good news. In Florida hospitals are discharging more COVID patients than they are admitting.

On the way to a songwriting appointment this past Friday morning, I stopped for breakfast at great little café near the publishing company where I write. And I sat right behind a guy wearing this jacket. 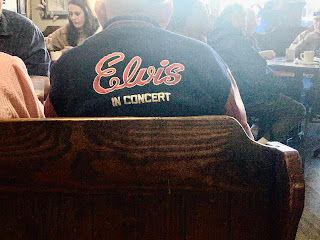 I had no idea Elvis was touring again. Anyone know how to get tickets??

Proof that the “King” is still popular is backed up by the 500,000 tourists who still tour Graceland every year.

I was sorry to hear that Sal Bando, the great third baseman for the Oakland A’s passed away after battling cancer at the age of 78. Baseball fans certainly remember those great championship Oakland teams Sal was a big part of. He was part of 3 World Series championship teams with that great roster that included Rollie Fingers, Vida Blue, Reggie Jackson, Joe Rudi, and others.  I got to know Sal and his wife Sandy when I was doing radio in Milwaukee. 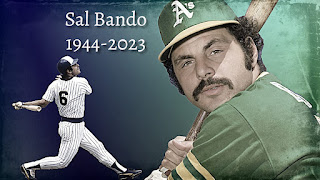 Sal was the General Manager of the Milwaukee Brewers at the time.  Our radio station WMIL was part of a yearly fund raiser for the CAP FUND…the Child Prevention Abuse Fund. My radio General Manager Brian Ongaro put me on the board. Sal and his wife Sandy were part of that board as was Bud Selig who owned the Milwaukee Brewers at the time before becoming the baseball commissioner.

I learned a ton about child abuse and helped raise a considerable amount of  money to educate folks about it.  The plaque you see below was in recognition of some of that money we raised from a parody song I wrote about the Packers who were going to the Super Bowl that kind of blew up in Wisconsin and is still one my most treasured mementos from those Milwaukee years. 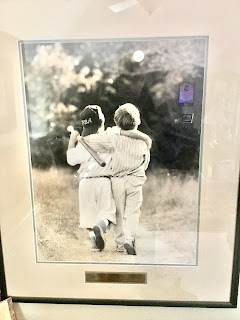 And I also got to know Sal a little bit from that experience. A genuinely nice man and always a pleasure to be around. My best to his family and his many many fans who not only loved him as a baseball player, but as a great human being. RIP.

In Charleston West Virginia Police recovered a stolen hot dog statue. The Dairy Winkle (yes…that’s a place) had a fire and someone stole their weenie statue. It’s back now where it belongs. Not sure yet what kind of sentence one gets for stealing a weenie, but we’ll find out soon. 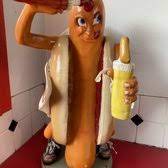 Of all the Star Wars spinoffs, and there have been many with more to come, my favorite spinoff so far is easily The Mandalorian on Disney+. They released a trailer for the upcoming season within 24 hours of posting it, 84 MILLION folks checked it out. Some other folks have fallen in love with Baby Yoda as well. 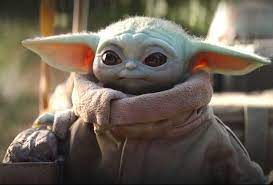 Check out this little gizmo that a got in Argentina invented. A little conveyor belt that toasts your bread and then butters it perfectly before it gets to you. Somebody must have gotten really tired of buttering their own toast.

And that brings me to my friend Heywood Banks who’s “Toast”song is a comedy song classic that he ends every with. He sings the song while using two forks as drumsticks to play on a two-sliced toaster. Check this out.

The Top 5 BEST Places To Retire

The Top 5 WORST Places To Retire

With so many constant sighting of Big Foot…I MAY have to buy this T-shirt to wear on stage at some of my shows. 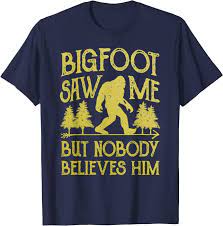 I’m back online writing with my friend Troy Engle in Pennsylvania who told me last week that he’s recording a new bluegrass album and that three of the songs we have written together will be included on this project. Good news there. Troy is a really talented musician, singer, and songwriter so I can’t wait to hear these songs when they’re finished in studio.