Thursday morning the first day of the last month of the danged year!

It will be a little cooler here today with a high of only 46. Things cooled down after that storm swept through late Tuesday night. We were fortunate and did not catch the worst of it. Louisiana, Mississippi, and Arkansas took the brunt of it with over 35 tornadoes touching down.

I had pretty much of an “off” day yesterday giving me a “no excuses” reminder to go the gym. Been awhile with being on the road and then sick for a bit. I also worked a bit on possible new shows for the calendar. Firming up details on a couple right now and will share once we get those locked in. It’s that time of year in Nashville, when the music business does slow down a bit, tours for acts come to an end as everyone starts to reset for their 2023 tours and music projects.

Also, my wife Kathy took filmed of one of the biggerbucks we’ve seen strolling around in our backyard, and we’ve had a few. And no, she won’t let me lease out a deer stand in our back yard.

Here’s yet another Christmas song I helped write, and this one is funny if I do say so. Wrote it with Brent Burns, so those of you who know or have seen the two of us in concert are probably already laughing. With good reason on this one. This one is titled “Grandma’s Got A Glock”. And it ties in pretty well with the “deer” I mentioned above.

LOOKING FOR A JOB?

The Mayor of New York City is looking for a “Rat Czar”. Someone who can head up a team to get rid of a bunch of rats in the Big Apple. They’ve got so many that they need a “Czar”. They should come for training with some good ole boys here in the south. It would be fun to see folks in NYC dressed in blaze orange and camo.

Ferrari has rolled out an SUV that will cost you $397,000!  It’s the all new Purosangue SUV. I don’t know what’s more shocking. The fact that someone would charge that much money for a vehicle, or the fact that they had to put a hold on the orders because they can’t keep up with demand. It’s a 2-year waiting period to get one of these “break the bank” bad boys right now 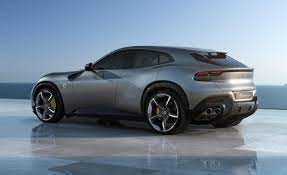 The Yankees just offered outfielder Aaron Judge $300 million over 8 years to remain a Yankee. And…he’s got other offers coming. Where did I put my old Rawlings glove anyway? I’ll bet you Aaron is on the waiting list for one of those Ferrari SUV’s right now.

At least it’s a little cheaper to drive a $397,000 vehicle right now. I saw gas at one pump in Nashville selling for $2.65 per gallon yesterday. If it keeps dropping, it’s going to force me to put my “Dipstick”song back into hibernation again until the price sneaks up again. And you know it will.

AND IF YOU CAN’T AFFORD TO DRIVE

Then walk. And walk backwards. Supposedly it improves your stability and balance. Experts say when you walk backwards you take shorter and more frequent steps and that leads to improved muscular endurance for muscles in your lower legs.

Lots of folks who walk use a step counter device on their wrist. So if you walk backwards, does it subtract steps?

The website NAMEBERRY listed what it says will be popular baby names for 2023. Pop culture comes into play for some of these names.

Billie (as in the singer Billie Eilish) Jolene as in the hit for Dolly Parton, and Scarlett and is Scarlett Johannsen the actress.

Everest, Cosmo, and Elio are at the top of the list.

Different names for the new year for sure.

I’ll be in a writing room with two talented ladies, Lauren Mascitti, and Kristen Bearfield. Lauren is just one of my favorite talents in this talent full town, and Kristen plays in a wonderful gospel-girl-group called “High Road”. They just toured Norway, and I’m anxious to hear some stories about that journey. Should be fun.