How can it be the 20th of December already. Tuesday morning arising in Nashville. High of 50 today but the forecast is calling for a chance of light snow Thursday evening with a forecast of DANGEROUS cold coming this weekend. A high of just 15 on Friday.

That Arctic blast is on its way making me glad I don’t live up north anymore. 50 below with wind chill predictions for Billings, MT, and Bismarck ND with below freezing for several northern states on the way. Nope. No thank you. Nashville is about as far north as I ever want to be again.

Meanwhile a bunch of folks in California are without power after a 6.4 magnitude earthquake hit there. So maybe the cold weather is not so bad after all.

I spent part of Monday learning how to submit songs that I’m a writer on to Hollywood to be considered for TV show and movie placements. A couple of months ago a song I’m a co-writer on was played on the Fox TV show “Monarch” starring Trace Adkins and Susan Sarandon. About two episodes later, they cancelled that show. So, I’m hoping if they like any of these songs that I’m sending them, and we’re lucky enough for some show to use part of these songs, that we don’t cancel some other shows!  I’ll be getting a bad reputation quickly.

It's an interesting process to say the least. You submit a song that you own, they listen, file it away, and then maybe one day if you’re lucky some show or movie will use a part of your song and send you a little check. It’s called “syncing”…and I’m hoping we can “sync” a little more in the future. The company I’m submitting songs too is owned by Tanvi Patel, who was my intern for a while in Cincinnati when I was doing the morning radio show at WUBE. I knew way back then that Tanvi was going to be very successful, and she is. And now after all these years, I’m trying to get her to use my original songs. Pretty cool.

And I watched a fair amount of the Manning Cast on ESPN 2 last night as Peyton and Eli covered the Packers-Rams game at cold Lambeau. Those two are so entertaining that I never switch over to the ESPN broadcast with Joe Buck and Troy Aikman. This is more fun to watch with those two and their guests they bring on to watch the game on their couches. And last night…theygot to put the spotlight on Gumby who was in the stands trying to pour beer into his eye. Uh huh. Fun stuff.

Today’s song I going to feature is Jim Cantore by my longtime friend Brent Burns. It was Brent’s idea to write a song about the weather dude who’s always on the beach when a hurricane is coming. Or he’s outdoors in the worst snowstorm or whatever disaster is pending. I didn’t know if it would work or not, but it does big time. Especially when either of us sing it near a beach where folks are used to seeing that guy in his baseball cap strapped to lamppost to prevent blowing away. It gets some of the very BIGGEST laughs for me whenever I’m down in Gulf Shores, Port St. Joe, Key West, any place with sand and water.

One side story. The song landed on a compilation album featuring a lot of artists. The CD sales went to hurricane relief which is great. But on the Weather Channel one day Jim Cantore got surprised by his two on air partners when they played part of our song for him off this relief fund album as they tried to raise money. His two partners were laughing their butts off, but Jim?  He didn’t smile once. Which made me and Brent laugh hysterically of course. Take a listen and laugh yourself. 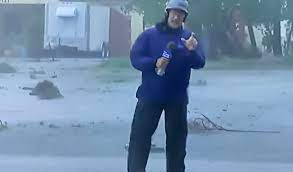 The Cincinnati Reds pitcher who pitched a perfect game was found dead in his home yesterday at way too young at just 62. I knew Tom Browning a bit from the days I did radio in Cincinnati. He was a big country music fan and listened to my show a lot. So much so that I convinced him to SING a Bengals song. Every week the Bengals played, I wrote a parody song about the Bengals and their opponent that weekend. We had several local celebrities sing and Tom was one of those. Just a great guy to hang with.

I asked him on the air once where his perfect game baseball was displayed. He told me it was lost. I said, “what”?!  Turns out his young boy grabbed it off the fireplace one day he needed a ball to play with in the backyard. That led to him hitting it way out in the woods, and they never found it. And it didn’t matter to Tom one bit. His thought was baseballs were meant to be played with. Even his perfect once in a lifetime game baseball. That’s how real he was.

He was funny too. If you’re a baseball fan you can never forget the moment after he left a game pitching in Wrigley Field when he snuck out, walked across the street outside the park and went up on the rooftop with a bunch of fans and watched the rest of the game having a big ole time. 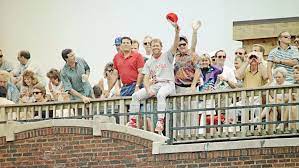 Just sorry to hear the sad news of his passing. Thanks for the great memories and for always keeping it real Tom.

I’m talking about the kind of folks who go on vacation and can’t relax because they start thinking, “did I leave the stove one”?  Someone else took note of that too, someone who writes articles and suggested that those kind of folks take a picture of their stove top knobs before they leave. Then when they’re on the beach starting to worry about their danged stoves, they can pull up the picture and see that the knobs were indeed in the “off” position. Hopefully. My advice would be to order something with lots of rum in it. You won’t worry about a thing back home and you’ll have a very enjoyable vacation. You’re welcome.

How booming is the entertainment industry here in Music City? So big that the city just appointed a “Nightlife Director” who’s job will be addressing the surging industry here. That guy is going be spending a LOT of his life in honkytonks.

I’m going to be rhyming with my old friend Gerald Smith this morning who has been a bit under the weather, so I’m glad to hear he’s better and ready to write again. Gerald has had his songs recorded by George Strait, Johnny Rodriguez, Lori Morgan, and Colin Raye to name a few. And he can write funny as well. One of my favorite songs of his is “The Lone Ranger-SilverBullet” song that George Jones recorded. Maybe we can write something like that this morning.