Tuesday morning and it’s hard to believe that tomorrow will be the last day of November. Up to 68 degrees here in Nashville but with that comes the chance of some severe storms later today. 40 million in the country could be affected by severe weather today. Heads up.

Gosh, what a wonderful evening I had last night helping celebrate the birthday of my dear friend and “Evening in the Round” music partner Linda Davis that was done in style last night at the Grand Ole Opry House Studio A where they used to film “Hee Haw” back in the day. 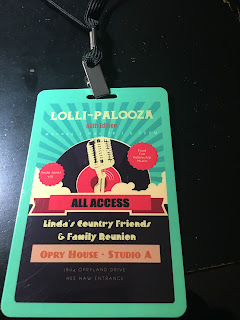 Linda’s husband Lang, and her daughters Hillary and Riley did an incredible job of putting this together. Linda had no idea how many folks would show up to help her celebrate her birthday. It truly was an evening full of talent and love. And family members of her from Texas made it in, including her sister, and Lang’s family including his sister were also in the house from South Carolina. 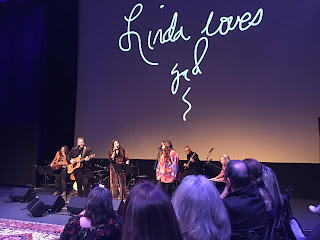 They set the room up, so it reminds one of the Country Family Reunion show hosted by Larry Black that you see on TV and on video tapes. A full stage was set up with sound and a big screen in the back where wonderful pictures flashed up of Linda and her family through the years. Folks that could not make it to the celebration filmed videos to say Happy Birthday that also flashed up on the screen. And Riley and her sister Hillary served as emcees where they introduced folks to get up and sing like Ricky Skaggs and the Whites, T. Graham Brown, Tom Douglas who sat behind the piano and serenade the room with his amazing hit “House That Built Me”. Baillie and the Boys did a number, my buddy Bobby Tomberlin sang “One More Day” and on and on it went. 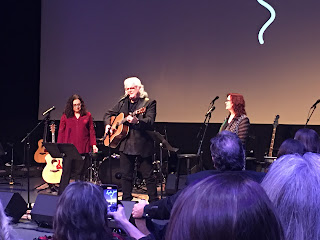 Lang, Hillary, and Riley did a great version of the Lady A hit “Run To You” that Tom Douglas also wrote with a band. Scott Borchetta and his wife were there. Scott being the head of Big Machine Records who signed Hillary and Lady A to his record label. And he also signed that girl Taylor Swift.  It was fun chatting with him.

Hillary and her husband Chris and their three young daughters also sang, and the kids stole everyone’s heart. 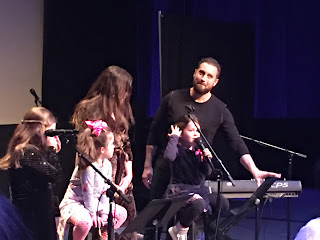 Heck, even I got up and sang. 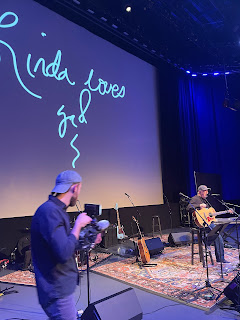 It was an evening none of us who were there will forget. Linda is just the nicest person, all about others, and it was great seeing a room full of folks that she loves returning the love last night. They should have filmed the whole thing! (And maybe they did)

Everyone went home with great memories, some birthday cake and this little tote bag with the words Linda always ends her e-mails and text with “Linda Loves Ya”. And anyone that knows her loves her right back. 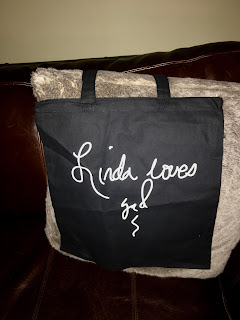 Here’s another Christmas song I helped write with my cowboy buddy Paul Bogart, “Thank God Some Things Never Change”. The song idea was Paul’s as he wanted to write about some of his family Christmas traditions that have been passed down and not lost. I was able to challenge some Christmas memories of my own into this sentimental Christmas song. Check it out HERE.

I also spent some time filling out some online interview questions for Phlockers Magazine. That magazine is an online publication that promotes all things “Trop Rock”. Beach music and more. If you follow this blog you know that I’ve been doing some Trop Rock shows, even emceed the world’s largest Parrot Head party this year down in Key West. So they are doing a “feature” interview on me right now that should be published in a month or two. My thanks to Todd Alexander, the writer, for asking me to do this. I know it will help get my name out there a bit more in that Trop Rock world, and I appreciate it Todd.

Scientists are working on a new flu vaccine shot that targets 20 viruses all at once and are hoping it might be something that will help end the pandemic.

The China CDC says a jogger sick with COVID infected 39 others while running through a park, showing how contagious Omicron is.

At last night’s birthday party, I talked with two friends, neither of whom have had COVID once. I’ve not met many who haven’t had it at least one time. Both of them were “knocking” on wood when they told me that.

A friend posted this on Facebook yesterday. Made me smile.

The book on marriage says, “Treat your wife like you treated her on the first date”. So after dinner I’m dropping her off at her parent’s house!

They (whomever they is) say that extreme weather has taken a toll on the Christmas tree supply this season. Yep. Another shortage. No worries here at the Whyte House as I always chop down an artificial tree each year to decorate.

One of the great discounts on stuff this Christmas season is Spanx. Bargain prices they say. I would also say, don’t gift wrap Spanx for your wife. That can only end badly.

Candy Clams. Uh huh. Take a look. Candy canes that taste like clams. Hang them as tinsel on your tree and watch your cats go crazy. 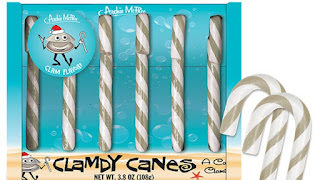 This is funny. A guy tweeted that all the confetti thrown during the Macy’s Thanksgiving Day Parade is cut from a single CVS receipt. Amen.

I’m writing at my publishing company this morning with my longtime friend Steve Dean. Andrea Pearson was to join us, but she’s got strep throat. Geez. Everybody’s got something it seems. Get better Andrea.