And a good Monday morning and “Happy Halloween” to you from Florida City, Florida where it will 88 degrees for a high today.

And what a weekend it’s been. Friday morning I drove about 13 and a half hours with stops from Nashville to Sarasota, Florida to play Donny Brewer’s “Karavan To The Keys”. It started in Texas and this stop was the last before all the folks who signed up to follow Donny to Key West and the big “Meeting of the Minds” there starting Tuesday. 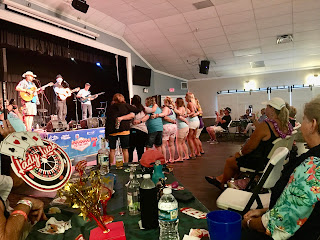 This event was held in a RV park, part retirement community it looks like and the event was incredible. First, the place was PACKED with Parrot Head fans. Second, it was so well run by Donny and his wife Michelle and others who make this happen year after year. 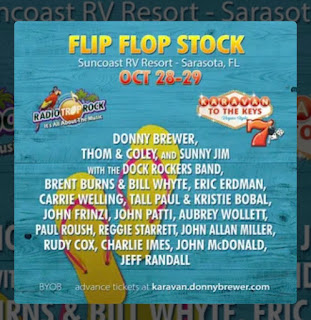 And the set Brent Burns and I had was so well received the room full of flip flops, beach shirts, and lover of beach music. They laughed, they sang along, they clapped…just a great show and so much fun being on stage with Brent doing what we love. 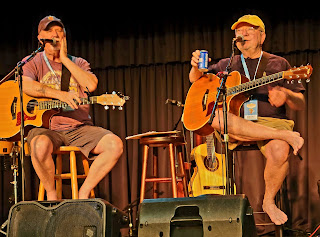 Heck, we even got framed at the event! 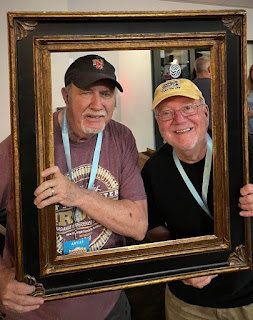 A HUGE thank you to Kristin McFadden for putting me up at her and her husband Bill’s beautiful second home complete with indoor pool. I had not met Kristin before, but after spending two nights in her home, I’ve made a great new Trop Rock friend.  Some other artists also bedded down there including Thom and Coley Shepherd as well as Eric Erdman and Carrie Welling, all them so talented. We all got to know each other a lot more, and it was the first time being around Carrie who sings likea bird. I have feeling that we will be writing songs together in the future. 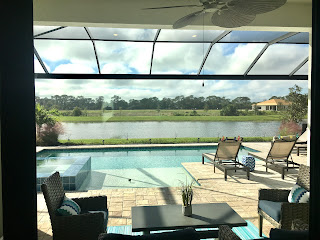 And I can’t thank Donny Brewer enough for including me on this musical stop to Key West we’re all on right now.

Was an off day of playing, so I got to hang out with some new Trop rock friends at Kristen’s house, and then went back to the Karavan and watched my extremely talented friend Eric Erdman just rock the house alongsidethe equally talented Donny Brewer. The more I dip my toes in the Trop Rock world, the more great artists I’m discovering that a lot of folks have not heard of. These two guys are up there on the top of the list for talented. Both are gifted writers, singers, AND producers as well. It was a pleasure listening to the two of them.

I made about a three- and half-hour trek to Florida City/Homestead where I bedded down last night and will do so again today before I make the final push into Key West tomorrow morning for the MOTM event where I’ll play three or 4 times and will also emcee a bunch of their bigger events. It’s an honor to be thought of and then chosen for this role and it will give me a. chance to meet and hang with a lot of the influential folks in this great genre of beach music and Parrot Heads. Looking forward to it.

Italy is now reinstating the health workers they fired because they did not comply with the vaccine requirement. New York city is already doing that, and I suspect this trend will continue big time as we adjust to dealing with COVID.

Shanghai announced it will close their Disneyland Park and Resort because of an increase of COVID cases.

Tuberculosis cases have increased during the pandemic. The first uptick of that in forever.

It’s worth over a BILLION dollars tonight…Halloween night. I guess that means the one in my pocket I’ve yet to look at was not a winner. Sigh. So I have to find a place here near the Keys that sells Powerball tickets. One preferably that sells WINNING tickets.

Although, I am keeping in mind this truth. And that is, the chance of you dying on the way to get a lottery tickets is greater than you actually winning it. The odds are officially 1 in 292 million, so I like my chances!

In a German Art Gallery there’s a masterpiece that’s been hanging upside down for years. They just found out. Doesn’t surprise me. I don’t really get “great” art for the most part. I would have probably hung the Mona Lisa upside down if I had been in charge at the Louvre. I saw a lot of masterpiece paintings and sculptures when my wife and I were in Italy a few years ago including the Sistine Chapel and the sculpture of David that made all the women swoon. All of that was cool. And I’m still trying to figure out why our tour guide frowned at me when I asked her which room had the Three Dogs Playing Poker masterpiece. Snooty. 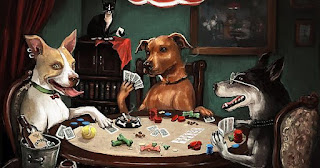 A study says green bananas reduce cancer by 50%. I hope that’s true. But I’m going to have a lot of trouble trying to switch mac and cheese for green bananas. Sigh.

Yep…all the trick or treaters are out this evening. My comedy friend Roger Naylor used to joke on stage at comedy clubs that he liked to drop a potato in the bottom of trick or treat bags to watch the kids reaction. He was not popular on Halloween night. Me? I’m very non-Halloween myself. Least favorite holiday. I can’t even carve a pumpkin to tell you the truth. But I did put a smiley face once on a can of pumpkin pie filling, put a fake candle on top, and set it on the front porch for our official Halloween decoration. Easy. You’re welcome to steal the idea.

“Woman Claims She Was Held At Customs For Being Too Pretty.”  Right. So if you sat next to an ugly person on your international flight you’ll know why.

A very lazy Monday here in south Florida today but that all changes tomorrow when I roll into Key West and start emceeing and playing music at this year’s Meeting of the Minds that will run through Saturday. As they say in the Parrot Head World, “Fins Up”. 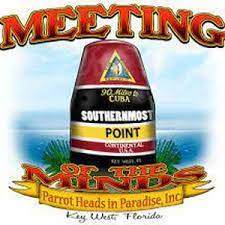