Thursday morning and I’m on the road to Gulf Shores, Alabama for a couple of shows. So a short blog this morning.

Well, last evening was pretty incredible. Jenny Tolman, Steve Dean, and myself did a special private songwriter show for a technology-based company from Detroit. Jenny’s father Steve, a former entertainer himself, put this show together for that company as part of their three-day business meeting in Nashville. We did the show in the Country Music Hall of Fame with a terrific view downtown Nashville just over our shoulders. AND…we had a couple of very special moments that went down. 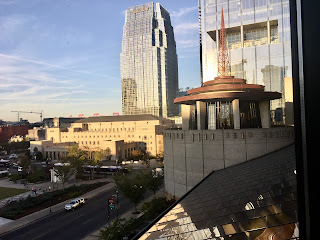 The three of us performed for about an hour, telling the stories behind our songs we’d written and then playing them. Jenny (who's very pregnant right now) sang three songs we had written together including this one that honored a soldier who lost in life in the Kabul bombings that Fox News aired, and it then became the most downloaded song in the country the next morning. “Lonely In The Lonestar”.

I did “Safe Haven” that Hillary Scott and the Scott Family recorded that went on the album “Love Remains” that won two Grammy Awards that year and told the story of how we wrote that song to honor Hillary’s grandfather who died of cancer.

And then this happened. Steve Dean sang a #1 song he helped write that Lee Greenwood recorded "Hearts Aren't Made To Break". And as he was singing the last chorus, Lee Greenwood snuck up, leaned over his shoulder, and sang harmony with Steve! Wow. We knew he was coming as a surprise but did not know he would do that.

And then Lee went over and sat behind a grand piano and played a few of his hits including God Bless The USA and told stories about opening for Elvis in Vegas and how Sinatra and others regularly came to his show. One great story after another 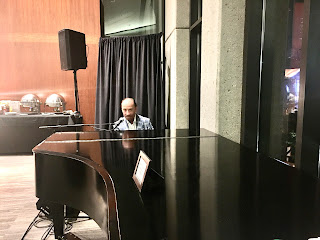 Truly a remarkable evening of music, and Lee hung around and visited for a long while after the show wrapped up. He’s 80 years old now, looks great and still sings GREAT as well.

Thank you, Steve Tolman, for putting together this incredible show last night! All of us that were there have a great memory now to hang onto. 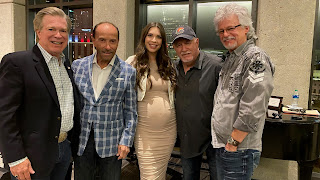 I’ll be in Gulf Shores in a few hours and then have a show at the Sunset Cork Room tomorrow evening with Brent Burns, followed by a Sunday evening show over in Mobile with Juanita Smith. More on that when a “regular” blog returns here.