Happy Labor Day. And the question remains, “Why is it called Labor Day when nobody is laboring?

Mine started Friday morning writing a song with Irene Kelley. We revisited a new song we had mostly written the last time we sat down together and worked at making it better. And I think we did that. I also got to hear the mostly finished version of the song “Satan Get Behind Me” that we wrote together that Irene is putting on her new album out in January. It’s an up-tempo-gospel-bluegrass number that sounds so great!  Thank you for recording it, Irene.

And it was fun hearing the stories about the constant bears and now bobcats that come to visit Irene in Gatlinburg at the A-Frame cabin she finished recently. The next song we write might be titled “Keep Your Doors Locked”.

I’ve had the pleasure of playing the Listening Room Café in Nashville several times now. It’s a wonderful place to play original music. And every time I do play on that stage it’s great fun. But Saturday night with my “Hits & Grins” trio that features Steve Dean, Victoria Venier and myself was off the charts. It’s a big room, and there was not a seat to be had. SOLD OUT. Tourists from across the U.S. and Canada filled the room and really got into the hour and a half show. 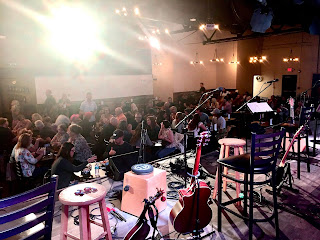 Victoria caught this moment on “Facebook Live” of me singing “Face For Radio” as wells as this new song from Steve Dean. You can see and hear what a great crowd we had from this. What a pleasure to play for those folks. Thank you to everyone who bought your tickets and came and thank you to Mattie for making us sound so good. Can’t wait to play the room again. 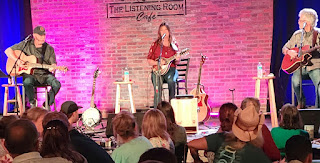 I have a songwriter show at Americanaville this Thursday evening with Wil Nance over in Livingston, Tennessee at 7 pm. Another great listening environment, AND they have REALLY great food there to boot. It’s my second time playing there and I’m looking forward to sitting on the stage with Wil and swapping songs.

Wil and I have a long history. When I was in Cincinnati playing music, and got out and went into radio, Wil who is from the St. Louis area as I am, took my place with a big part of that band I left behind for a couple of years. Then he moved to Nashville and became a successful songwriter with big hits like “She’s Everything” for Brad Paisley. And now all these years later, we write songs together and share old Missouri memories. This Thursday will be fun. Come see us. 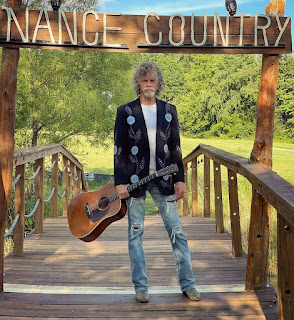 The “Blast on the Bay” Songwriters Festival I’ve been blogging about is about to release their schedule for this year. They’ve been releasing individual bios of the songwriters that will be attending. I’ll be there with “Hits & Grins” and this week the festival posted my biography. The festival is October 20-23 this year. 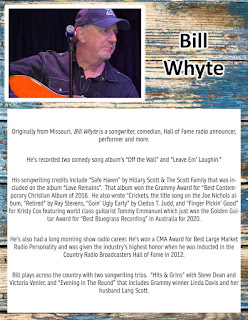 An independent traditional country artist here in town Scott Southworth recorded a song idea I brought to him a few years that we finished up together titled, “That’s Country, No Matter What Country You’re In”. I brought the idea to Scott because he plays overseas quite a bit. So, we finished the song, couple years later he not only records it, BUT he got 7 singers from 7 other countries to help sing this song! There will be a video too to be released in a few weeks. Can’t wait to see that myself. So thank you Scott for thinking outside the box a bit and doing something special with this song. 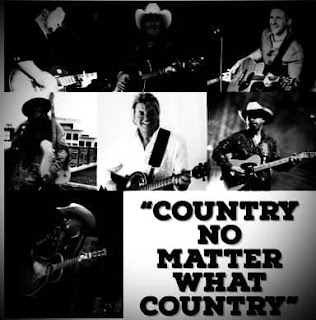 Underwire bras are back. Why? The pandemic ended, and it’s back to work so what’s comfortable around the house I guess doesn’t seem to work for the workplace. Have I ever mentioned how much I enjoy the fact that I’m a guy and the word “underwire” never enters my mind?

Denmark is now dropping all restrictions for the winter in that country adding to the growing list of countries doing so.

This week the non-vaccinated can go back to cruising again as Carnival, Disney and the Royal Caribbean Cruise lines have all dropped their restrictions.

A PLACE ON THE BEACH

MarketWatch just released a list of 5 affordable places to live on the beach. Places where one can still find a house or condo in the $200,000 range.

I’ve never been to any of those cities, have you?  But if you could live in or near the beach for that price, folks may be checking those 5 out after MarketWatch drew attention to them.

One if 5 home sellers have lowered their prices. The housing market is showing signs of cooling down for the first time in a bit. I bumped into an appraiser friend yesterday afternoon who told me the same thing. That home prices are dropping. And that those who still have high prices on their homes are seeing them sit longer.

Which brings us to this funny realtor joke that a woman posted. “I’m getting married to a top-producing realtor tomorrow. He’s so dreamy. Check out the diamond engagement ring he sold me.”

Those cheap $3 movie tickets on National Cinema Day this weekend worked. It got people back in the theaters. 81 MILLION dollars was taken in. Cha Ching. So when you figure in the $3 tickets with the cost of popcorn, coke, and candy for a family of four, the movie only cost you 50 or 60 bucks. A bargain.

Some of the folks at Mayo are saying they may have a pill that will extend life by 30%. It boosts a key protein in the body, helping protect older folks against aging and a range of diseases. Wouldn’t that be great?  And even greater if they could roll it out quickly!

Speaking of age. A daughter says, After my 91-year-old mother finished having her hair cut and shaped, the stylist announced, “There, now you look ten years younger.” My mother, unimpressed, replied, “Who wants to look 81 years old”?

A day off like the rest of you for the most part and getting ready for the week ahead. Come see us if you can.

Have a great Labor Day!