My friend Brent Burns was a guest on the nationally syndicated Big D and Bubba radio show “ and I went along for the ride while Brent recorded three of his funny songs for their podcast and show that will air sometime next week. I’ll link that here on my blog once I found out when. He did one of our songs, “Exercise Makes Me Look Good Naked”. So that will be nice having that funny song exposed to a national audience. 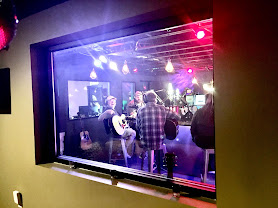 Once we wrapped up that recording for the radio show we headed right back to the recording studio and finished up some vocals and added a few harmony parts for the 5 songs being added to another 5 we recorded earlier this Spring. 10 songs coming on the new album with a title to be determined.

And from there I dropped him off at the airport to for his Southwest flight back home to the beach. We had a very fun and productive couple of days together and a LOT of laughs.

After a hectic couple of days in the studio I got to put my feet up in the baseball park last night and watched our Nashville Sounds play Jacksonville and for the first time this year, some folks were wearing long sleeves. Cooler air, but so comfortable for the ballgame. Maybe Fall is on the way, although the high temperature here will be in the 90’s again come Monday.

The “Blast on the Bay” songwriters festival in Port St. Joe, Florida will be October 2023 this year and I’ll be there again with my “Hits & Grins” buddies Steve Dean and Victoria Venier. The schedule will be released any day so stay tuned. But yesterday, I did get this roster of the songwriters that will be playing. A whole bunch of hits has been written by this group of folks. If you like the beach, warmer weather, original music, good food?  You should come check out this great festival. One of my favorites every year. 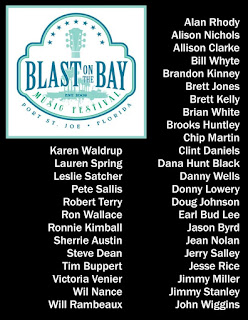 The WHO is saying they see the end of the pandemic in sight. There’s some good optimistic news. The world death rate is the lowest since March of 2020, back when the whole thing began.

Meanwhile, the White House is encouraging us to get the newest of the newest Omicron booster shot by Halloween?  Why?  Because Thanksgiving is only 3 weeks later when a lot of folks will be gathering and traveling.

A new study in Britain reveals that a LOT of folks who get vaccinated have a similar symptom occur. Diarrhea. Commonly that symptom will last 2 or 3 days, but for some it goes 7 days are longer.

NOW THIS WOULD BE GREAT

Looks like there is technology available now that can remove the accent from those customer service folks. You know, the ones you can’t understand that you call when you need help? I hate saying, “I’m sorry, I can’t understand you”. So now when I call for help the person answering the phone in India won’t make me want to shoot myself. I hope.

I’LL TAKE ONE OF THESE TOO

So the Roomba thing is great. Some folks have bought and seem to be loving those robotic lawn mowers that you see advertised every day. And now, we are getting a robotic snow blower!  Where was this bad boy when I lived in Wisconsin and had to put on so many layers of clothing that my neighbors thought they were seeing the Michelin Man out in the driveway trying to clear 12 feet of snow?!  I do not miss never having to blow a driveway out. But if for some reason I had to deal with that again?  I’d be ordering one of these. 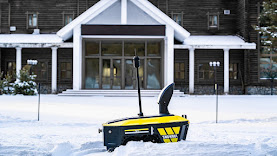 Now if I can get a robotic leaf blower, and robotic weed puller, that would be great as well.

You KNOW those folks have seen some weird things when they deliver whatever they deliver to your door. Some folks forget to put their clothes on or decide to give the pizza boy a surprise…so they say.

One delivery driver says he delivered a couch to his own house. He had no idea his wife had ordered one.

Another delivery driver took pizza to a funeral home for a service and one of the folks taking the pizza said, “I’m starved to death”!

When I was in High School, I delivered groceries in my small town for the little A&P grocery store. Remember those?  I liked it. It was a safer time when no-one worried about safety. Heck, I hitchhiked a ton back then and never thought about crawling in a back seat or the back of a pickup truck that would pull over and let me ride.

I do remember though that one regular stop was for a very elderly lady in a tiny house overgrown completely with weeds. And when you opened the door, you could see she was a hoarder. Lots of cats and huge, huge stacks of newspaper all over the living room hiding any furniture that was there. She’d open the door, I’d drop the groceries, and always walk away with a very musty dank smell in my nose. But everyone I delivered too had their clothes on.

How popular is Garth Brooks STILL? He’s in Ireland to finally play shows. He’s sold over 400,000 tickets already. And he’s getting around. He surprised some folks in a little Irish Pub and sang. Garth being Garth.

NO FRIES WITH THAT

McDonald’s will close all their stores in England on Monday to honor Queen Elizabeth.  I didn’t think the Golden Arches light ever went out for anyone or anything.

A woman’s suitcase containing her prosthetic leg was mishandled and sent to the wrong destination for over 10 days by Allegiant Airlines. Geez. I have a feeling that will be a carry-on item from now on.

Check out this really fast barber. This young man just cut ahead of hair in 41.17 seconds!  It broke a Guinness Record. They have records for EVERYTHING.  He should open a shop and call it, “Got A Minute? Haircut”

How bad is inflation? Bad enough that Seniors look to be getting a $1,729 increase in their Social Security check. That would be the biggest bump every. That should maybe cover half the price of a dozen eggs these days.

“Rampaging Goat In Custody After Wreaking Havoc On An Arizona Neighborhood And Peeing On A Deputy”. You just cannot let a goat get off their meds!

Back to the writing table where bluegrass great Tim Stafford will join me on my computer from Knoxville to write something new together. So a halfway normal routine day on tap in Nashville.