Monday morning, the first day in August and I’m on the way home to Nashville from Gulf Shores.

My show Saturday with Brent Burns was in Pensacola. A House concert hosted by Judd & Gayle Williams who are huge fans of Trop Rock music. They host the Concert on Canal Series featuring folks that sing about the beach like Brent at their beautiful home that sits right on the canal in Pensacola. From our stools we could watch the boats go up and down the canal, many of them honking their boat horns as they cruised by and heard some of the music. To our right, some Parrot Heads were floating in the pool. Just a beautiful view and a great place to play music. My daughter Heather and her husband Casey made the 3-hour trip down from Fort Rucker, Alabama to hang with Dad for the day and that made it even more special. And Brent’s daughter Nicole flew in from Texas to be here for the show too, and to help celebrate Brent’s girlfriend Colleen’s birthday. Yes, we played on her birthday and Brent has some splainin’ to do for sure. 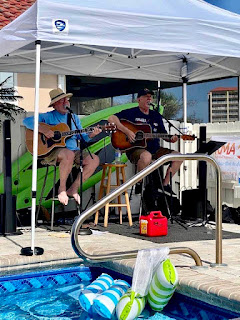 And my friend Jessie Ritter came by and got up and sang three original songs, two we wrote together including one this week and those sounded great. And so did she.

Not a bad way to spend three hours on a sunny Saturday in Pensacola. Singing, looking at the water, and hanging with fans of beach songs. Thank you, Judd, and Gayle, for having us. 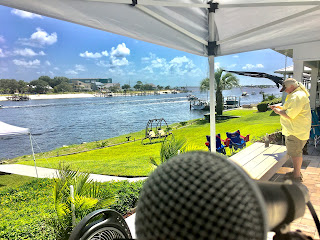 I made the trip over to Mobile from Gulf Shores to Mobile to the Peoples Listening Room to work with comedienne Juanita Smith who was SO doggone funny Sunday night. It’s the third time Juanita and I have worked this room together and the place was full, and folks were laughing danged hard all night long. Juanita decided to talk about her life in a funny way after her husband passed a few years ago, and she’s quickly become very very good at it. I saw several familiar faces in the crowd, and it was nice seeing all of you again. Gosh I had such a good time. And thank you to the owner Jim Pennington for providing such a wonderful intimate listening room to work in. He’s already tossed out the idea of coming back again before years end, so we’ll see, and I’ll let you know if that works out. 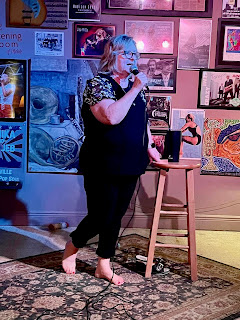 I got to know Juanita through her son Eric Erdman who is a world class entertainer, guitar player, singer, producer who I see at some Trop Rock shows every now and then, and we’ve written together. He called one day and said, “Bill, I have a weird question for you. Would you consider driving to Mobile and doing a show with my Mom”?  I did not know his Mom at the time, but I’m surely glad I said “yes” as we’ve now become great friends through the three shows we’ve now done together at the Peoples Room. Thank you, Eric. 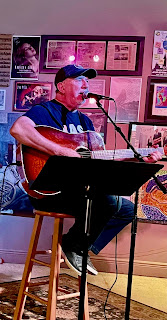 Dennis Simpson did a podcast-video interview with me and Brent Burns a few days ago and we talked about the show we did in Hot Springs, Arkansas recently at the Village and about the music business and more. And there was a lot of laughs during the interview as well. Happy to share that interview with you right HERE. Check it out. And thank you Dennis for having us on your show. We had fun.

The U.S. has secured 171 million doses of vaccine to combat the Omicron variant this Fall.

President Biden got COVID a second time. Just over it and has it again. He will be in strict isolation for a while.

New date published by The Economist from the World Bank this week shows that the number of percentage of children in low- and middle-income countries who can’t read has risen 13% since the pandemic started. Schools being closed didn’t help.

That the phrase “My stomach is tight for you” is a term of endearment in Iran? Me neither. Going to try that on my wife tonight. I’ll let you know the results tomorrow.

WHAT HAPPENS IN VEGAS

Weird to see the Las Vegas strip underwater isn’t it. Big time flooding there, and in Kentucky recently. Back in the day when I went to Vegas a few times I always found myself underwater after betting on any game. So somehow Vegas being “underwater” seems kind of right.

ExxonMobil, Shell, and Chevron reported record profits in the 2nd quarter. They made 46 BILLION dollars. Anyone surprised? And gas is still hovering around 4 bucks a gallon.

A little proof of how TV shows pursue story lines. I had a conversation with someone who competed on American Idol and the show wanted to pursue how this contestant was a “trailer park” girl because she and her husband OWNED a trailer park. Just trying to make “good” TV here folks. The contestant said, “no”.

It’s that time of year when the county fairs are breaking out and you can get any food you like fried…on a stick. I’m still a bit scarred after watching a mule jump off a diving board at a fair when I was a kid, but I do love the unusual events and things one can do only at fairs. Where else can you see pigs race for Oreos? Heck, the Iowa State Fair has a “Women’s Rubber Chicken Throwing Contest”. How can you not stop and watch that? Bring on the Fairs. And save me a ride on the Tilt A Whirl. 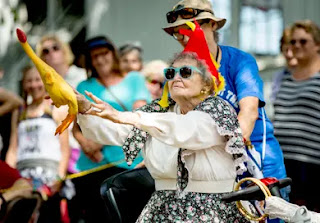 Give a person a fish and you feed them for a day. Teach a person to use the Internet and they won’t bother you for days.

Yet another shortage. Chocolate. Hershey’s admits it will not have enough candy to cover Halloween this year because of “capacity restraints”. Makes me think about my comedian-author friend out in Arizona who was way ahead of his times for Halloween. He’d drop a potato in a kids bag for a healthy treat. Yes…he got some weird looks when the tater fell through the bottom of the kid’s sack.

“Man Tries To Perform Nose Job On Himself And Winds Up In The Hospital”. Once again, as my comedian friend Heywood Banks says, “There’s no 12-step plan for stupid.”

Back to Nashville to settle in for a very full week of songwriting.