Good morning from the western mountains of Colorado. A little warmer today with the temp sneaking up to the low 90’s. Beats the 105-heat index though back home in Music City.

Day 3 and it was time to write with a veteran from Colorado. So our group of 4 Nashville songwriters gathered at the Welcome Home Alliance here in Montrose, grabbed a little coffee and then sat down to write a song with veterans that were assigned to us. Mine was Carl Phillips. Man, what a great guy. Carl wanted to be in the Forestry service and signed up for a college in Colorado for that. They would not accept him partly because of a small physical thing and they told him he wasn’t good enough at algebra of all things, something they said he needed to be good at. Privately he agreed with me that he’s never used algebra once in his life. But I digress. (I could build an entire comedy routine around the worthlessness of algebra to me. I wish my High School would have swapped that for teaching me how to invest and balance a checkbook. But I digress again.

So Carl knew he would be drafted and signed up for the Navy. They made him a corpsman. When he finished training, he asked where he was going. An officer said, “Somewhere West of the Mississippi”. Well, “west of the Mississippi” in his case meant Viet Nam. He was there 9 months in a Marine company. Saw it all…and then some. He retired after 22 years in the service.

After listening to his story I was all set to write a song titled “West of the Mississippi” about his life and service. And that’s when he showed me something he had written himself about all the things he’s seen in his life. But of all the things, good and bad that Carl has seen he wrote, “But I’ve Never Seen Anything Like The Love In My Savior’s Eyes.”

I was floored by that. So I threw away the idea for “Mississippi” and wrote that with him instead. He teared up at the end, so I knew I had made the right choice.

Then last night all the songwriters gathered again at the Welcoming Center and sang all the songs we’d written earlier in the day for those veterans and their families in a private gathering and that’s always moving. Each writer signed the lyric sheet and gave it to the veteran at the end of their performance that they can frame if they’d like. Quite the moving experience to say the least. 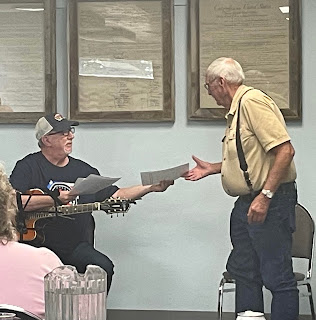 My co-writer buddy out in Maryland Rick Lang sent me a copy of the Christmas song Terry Baucom’s Dukes of Drive just recorded called “Christmas At The Old Homeplace”. It’ a bluegrass Christmas song and they did a great job on the song. Thank you, Terry, and Rick. It will be out this season sometime before Christmas of course. I’ll let you know when.

And I got word that a new duo I just wrote with Caleb and Leann just recorded the song we wrote with a noted producer Keith Stegall.  That was a nice surprise as I had no clue, they liked it enough to record it. Can’t wait to hear that.

I was sad to see that actor James Caan passed yesterday. So good in so many movies. His performance in the Godfather alone will always be memorable. And then you saw him turn comedic as the Father figure in “Elf” with Will Ferrell. 82 and too young. RIP.

Experts are saying the new Omicron variant is bringing the 2nd biggest wave of COVID cases. Jason Salemi, an associate professor of epidemiology at the University of South Florida’s College of Public Health says, “Covid-19 in not nearly over. We’re seeing dramatic increases in many places throughout the United States.” And then added, “We’re headed in a bad direction.”.

In April the CDC revealed that the majority of Americans have had COVID. The estimated number is 186 million. And the reinfection numbers are now climbing. It’s not often I talk with anyone who has not had COVID at least once.

And with all of that some experts are now saying the worst of it may finally be over.

Love this observational tweet from a Dad who tweeted, “Flat screen TV’s have robbed my kids of learning the art of hitting a television and cursing to make it work.” Remember? I’ve done that a few times. Heck, I’m old enough to remember being my Dad’s remote control.

Amazon Prime Days will have some folks hitting the “put it in my cart” button on their computers July 11-12. One woman admitted, “Every day is Amazon Prime Day when you have a credit card and no self-control. Well there’s that!

How much will Tom Cruise for Top Gun-Maverick? Somewhere around 55 million on top of the salary he was paid. The movie had now made over a BILLION dollars worldwide. Because it’s one of those movies folks are seeing multiple times, Cruise has hit all his bonus marks and then some. Good work if you can get it.

I read an interesting article this morning from a Doctor who talked about things that people say when they are dying. He said that “While my elderly patients often share things like ‘I’m at peace and I’ve lived a good life, that has not been the case for most of my younger patients. Their words simply come down to this, ‘I’m not ready to die. I still have so much more living to do.”

So the lesson I took from that is one should make sure you’re truly living every day you’re allowed to live. None of us knows when our time is up. There’s a great phrase that I love, “Everyone dies, but not everyone lives.” Amen.

Some of those thoughts went into this song I helped write with my buddy Brent Burns, “If Not Now, When" that landed on his Trop Rock Album of the Year "My Jukebox At The Beach".  All those things you say you wanna or you’re gonna do?  I’ve learned you need to work at checking them off your list.

Don’t look now, but gas prices are going down a bit. One analyst is saying gas could dip below $4 a gallon in parts of the US. Let me know when it drops below 2 bucks a gallon again. The price has been so ridiculous that it forced one guy to call the police to tell them he had been robbed. When the police asked the man if he knew who did it, he replied, “yes, it was pump number 5”.

I’ll be doing a Zoom interview to help promote an upcoming concert I have with my friend Brent Burns at the Hot Springs Village in Arkansas on July 21 at Woodlands Auditorium. It’s a big theater, and as of now just a little over 100 tickets are left. The following night on July 22 Brent and I will play a Parrot Head house concert show open to the public at the “Hangout” in Sullivan, Missouri. All the details for both shows are in my calendar here on the website.

At 7 pm tonight I’ll join my songwriter buddies for a big concert here in Montrose at this amphitheater where we’ll each sing the songs we wrote with our individual veterans here. We’ll also be performing other songs in what should be a 2-hour concert or so here in the mountains. Looking forward to that.

Then tomorrow morning we’re back on a plane home.