Monday morning. Back home in Nashville. 91 is the hot high today.

It truly WAS a musical weekend with my friend Brent Burns that started with a tremendous concert in Hot Springs, Arkansas this past Thursday evening that I blogged about last Friday morning. 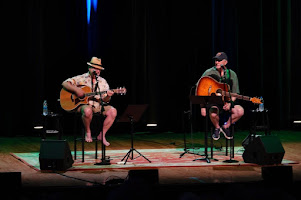 Friday morning we made our way to Sullivan, Missouri and the “Hangout” which is the home of a couple of wonderful folks who LOVE Trop Rock music. So much so that their basement is a beach show room, complete with stage, beach colors, Jimmy Buffett posters and albums and a full bar complete with “on tap” Landshark beer. Truly unbelievable. 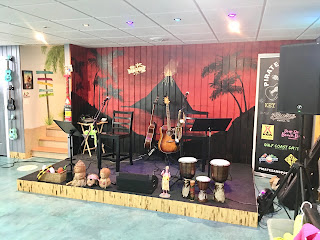 And Brent and I had a room full of Trop Rock fans to entertain who brought their lawn chairs and coolers indoors because the weather was so hot. I’m glad it moved indoors because not only was it stifling heat, but this room they built is just such a cool room to play in! 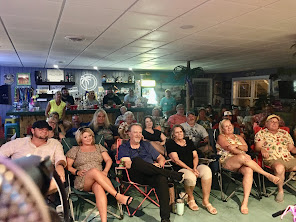 Mark and Colleen Fuchs built this place because of their love of the beach and beach music and folks who make beach music for a living. Brent recorded a great song called “Beach In My Backyard” and Friday night I got a “view” of what he was writing about. My extended family made the trip down to see us from near St. Louis and that was just a bonus for what was a great night.

I can’t thank Mark and Colleen enough for having me and putting me up overnight in their lovely home in a guest room that was also tropical!  Can’t wait to go back and do it again! Adam and Amy Pope, a husband wife duo that I love recorded a couple of songs we wrote including their next single “Tonight I’m Playing Patsy” that my friend Darin Aldridge produced on the couple I North Carolina. The single will be out this Friday that Adam and I wrote together at our first writing session ever. And it sounds great! I should be able to share that her this Friday. Thank you, Adam, and Amy, for recording this song. 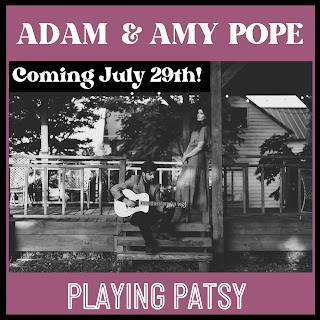 And it looks like Cledus T. Judd may be recording another song that I helped write a few months ago with Mark Hauser. Cool. More than cool. Cledus asked to jump in and re-write the song a little and we gave him permission to do so. That’s what happened on the very first song I had recorded here in Nashville when a producer friend gave Cledus a copy of a song I had written “If George Strait Starts Dancing”. He and his producer Chris Clark added a verse or so to that song and it turned out pretty well. So I’m happy having Cledus jump in on this one too. This would be the 6th song of mine Cledus is involved with, five of those were songs he released. So fingers crossed on number 6 here. I can’t give out the title yet, but it has something to do with his friend Brad Paisley.

As if COVID isn’t enough, the WHO has now declared the outbreak of monkeypox to be a public health concern internationally. So, if you get the COVID shot with two boosters (at least) a monkeypox jab, one for shingles, one for the flu…you’ll be able to drink water, walk outdoors and water your lawn.

A new “one-jab” self-boosting vaccine is being developed by scientists. Once it’s in you, it will be capable of giving you several boosters. Don’t ask. I have no idea how that would work. It’s the “jab” that keeps on giving. FYI, I think “jab” should be the “word of 2022.”

Cruise ships are now making their own individual COVID policies. Jimmy Buffett’s Margaritaville Cruise Line has dropped the requirement to take a COVID test before boarding although passenger still must be vaccinated. Meanwhile, Virgin Voyager cruise is dropping ALL restrictions, and all can cruise on their ships again vaccinated or not.

A woman texted that a sure sign of parenthood is when you’re playing mini golf and you let the folks behind you “play through”. Yep.

Love this. Things can get boring if you’re a bullpen pitcher waiting to be called into a game. You sit out behind the outfield wall and try to kill time until it’s your time. Well, the Pirate bullpen decided to kill some of that time by growing a danged garden out there. Too funny. Check this out. 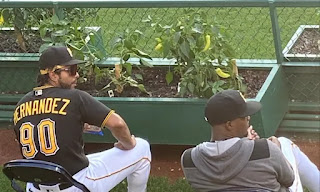 THIS JUST IN
Mega Millions is now worth 790 million tomorrow night. One person tweeted that if they won the lotto, they would pay off their college debt and then buy a pack of gum if there was enough left over. Hello! What part of 790 MILLION don’t you understand?

A kid under 9 gets his finger broken while playing chess against a robot in South Korea. Yikes. He was supposed to wait before making a move and forgot and the danged robot attacked him. This is why I play gigantic checkers at Cracker Barrel. Nobody attacks you when you saw “crown” me while you’re rocking in those front porch chairs.

Staying in South Korea, the KFC there had rolled out a Mint-Chocolate Flavored Dip for its chicken. Does that sound good? “Finger Mintin’ Good” I suppose.

I’ll be online with a writer from California who need help with a song. These sessions are set up by my friend Brent Baxter whose website “Songwriting Pro” allows amateur writers to enlist the help of a “pro” writer for critiques and tips and helping shape up their song ideas. It will be the third time I’ve worked with Ben Krahne in this capacity, and I’m looking forward to it.

I’m back on the road sooner than later with a road trip to Gulf Shores on Wednesday to do some writing with Brent Burns as he still needs a few new songs for his next album.

Friday night Brent and I play a wonderful concert series called “Concerts on the Canal” in Pensacola hosted by our friend Judd Williams and his wife.

Then Saturday evening I return for the third time to play the Peoples Listening Room in Mobile with my funny standup friend Juanita Smith. Yep, busy week ahead. 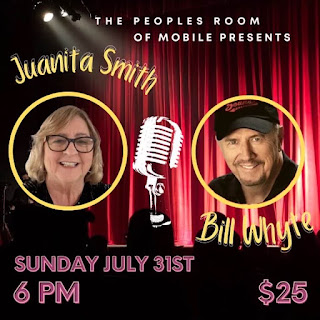