Monday morning and I’m back home in Nashville from the mountains of Colorado. Back to hot weather with 93 and humidity today.

Friday night our Freedom Sings USA group had our concert for the veterans that our group wrote songs with at a beautiful new amphitheater in Montrose, Colorado. The songwriters included Bobby Tomberlin, Steve Dean, Wil Nance, Wood Newton and me. We had a great crowd Friday night out on the lawn, and we played for 2 and a half hours or so. And once again each songwriter performed the song, we had written with a veteran Thursday morning. My veteran retired Navy corpsman Carl Phillips sat on the front row with some of the other veterans. After each song finished the veteran stood and the audience showered those veterans with applause.  Those are just incredible moments every time when we see the crowd rise to their feet to honor someone who served their country. It was a pleasure to write Carl’s personal story into a song called “In My Savior’s Eyes.” I salute you, my friend. 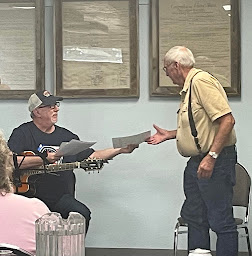 Carl shared with me that he had been divorced a long while and wasn’t all that unhappy about it. In fact, he thought the funny song that Bobby Tomberlin wrote with Bill Anderson and sang Friday night, “Wherever She Is, I Hope She Stays There” was also written for him. That made ME laugh big time.

Thank you, Freedom Sings USA and the folks in Montrose who organized this. This was my 3rd year in Colorado and I’m already looking forward to doing it again next year already. 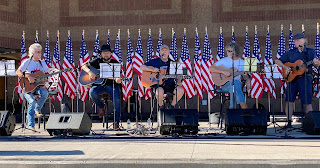 I have to say we had a flawless flight out to Montrose and back. We had connections in Dallas both times, and with all the bad news of cancellations in the news, I was dreading this flight thinking we might be in airports all day trying to get there. That happened to us last year on this flight, and we missed our first event because of it. But American Airlines got us there on time, with no hassles whatsoever. Wish every flight was as good as these were.

BUT…I will say it was a just little concerning boarding I return flight in Montrose and seeing this! 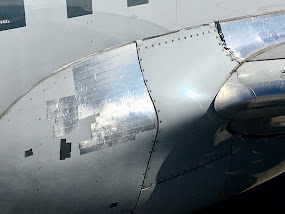 I added a show date with Linda Davis and Lang Scott. Our “Evening in the Round” show will play in Morton, Illinois Monday evening at 7 pm at the Bertha Frank Performing Arts Center in Morton. Morton is a suburb of Peoria. 82% of world’s canned pumpkin comes out of Morton. Thought you should know.

I also added another show in Key West, Florida on Friday November 4. I’ll have a slot in Kelly McGuire’s Lighthouse Songwriters show that takes place on a big stage on the sand outside the Casa Hotel in Key West as part of the MOTM “Meeting of the Minds” event where parrotheads gather from all over the world for a week of Trop Rock music. This year, I’m also the main emcee for the event that runs for the entire first week of November. Tough duty huh?

New York City reports that only a very few kids 5 and under have received the COVID vaccine shot. At the same time the New York City Department of Health urges mask wearing again as COVID-19 cases rise.

A Yale Study suggests COVID will not be endemic for at least 2 more years. Endemic meaning that the disease will still be around but won’t disrupt our daily lives.

Denzel Washington has COVID to blame for skipping a ceremony to receive the Presidential Medal of Freedom over the weekend from the President.

Here in Nashville, the local newspaper the Tennessean ask readers to have a little fun and come up with names for a new street sweeper. This is Nashville, and the town is full of creative folks. So it was no surprise that there were some clever names submitted. My 3 favorites so far would be: Grand Ole Sweeper, Taylor Swept & Sweep Caroline.

We have a herd of deer that we see regularly in our yard. And look what we saw out in the backyard yesterday. The newbies have arrived…spots and all. We see fox, turkeys, squirrels, rabbits, and more. Sort of like a free zoo here sometimes.

Elon Musk walked away from his 44-BILLION-dollar deal to buy Twitter saying that the social media company had failed to provide information about fake accounts. Maybe he’ll buy My Space instead…for much less money.

It is 7/11 today and that means for a few days you can get a free Slurpee at any 7/11 store. Brain freeze day is what I like to call it.

Disney and Universal in Orlando compete. And the competition is heating up. Universal has announced yet another park add on with UniversalEpic Universe to launch in 2025. There will be a huge Nintendo themed area, a Donkey Kong coaster and Monster and Wizarding rides. It’s being built now.

Meanwhile across the way at Disney World they are opening new rides. Remy’s Ratatouille Adventure is open, and a Guardians of the Galaxy ride is on its. And a new Tron ride that looks very cool that’s been successful at Disney Shanghai is also on the way to Disney World. More reasons to go back to Orlando.

Travel Magazine put out this article listing 101 things theythink all of us should do in the US. You can pick a lot of them. Take a ride on Route 66. See Disney World. But spend a night in a haunted house? I don’t see that being high on my personal list. Nope. Y’all go on without me.

Reportedly the activity where people wear mermaid fins andtails, is growing in popularity around the world. Mermaid swim clubs have formed. Okay then. Can’t wait until it becomes an Olympic sport.

A very busy Monday in front of me that starts with a songwriting appointment with my friend Wil Nance, and his friend Mitch Oglesby who I’ve not written yet. But Mitch has had a lot of folks record his songs including Chris Janson including Cold Beer Truth, and he’s a writer on the new Luke Bryan hit as well. So I’m looking forward to writing an idea I shared with Wil, who then shared it with Mitch who loves it enough to join in. Should be a good write.

And I’ll go straight from that to write with a corporate group of folks along with several other Nashville songwriters in a team building exercise. Tell you more about that tomorrow.