Happy 4th of July!  Let the fireworks begin. And in my neck of the woods, that means they’ll be firing them up for the next 10 days or more. It will be 95 here in Nashville today…very 4th of “Julyish”.

I don’t know where to start about how great my show was in Louisiana, Missouri Friday night for the 50th Anniversary celebration of “Mo Mo” the Missouri Monster. The Elks Lodge where I played must have had well over 200 folks attending, and I think I knew at least 90% of the crowd filled with family members, friends, high school classmates from Elsberry, Missouri and even a couple of old members of my band when I was young who I did not recognize. It’s been that long. Tim Burke played drums in my band, and I had not seen him since then. He drove in from Nebraska to see the show. And Crystal Motley who sang in my young band also showed up, and I’d not seen her since those days and didn’t know her either. Geez. I need to go home more often.

It was just an incredible night of love and music and laughter, and I was frankly overwhelmed by all the kindness and folks wanting a hug or an autograph or share an old story.

I was so grateful that my friend Joe Lewis made it with help, and I got him on stage to talk about Mo Mo. Joe and the owner of KPCR Radio in Bowling Green where I worked wrote it as a poem, I added music and recorded it. So we had a great interview about the Big Foot legend, and then the radio station owner Paul Salois (who’s passed) son Joseph got up on stage and recounted some stories too. A guy in a Mo Mo suit danced in the building as I sang that “Mo Mo” song, and on the last chorus the entire crowd sang along. Amazing.

After I sang that song, state representative Chad Perkins came on stage and gave me an official certificate to honor my part of creating that song. Come to find out, Chad worked at KPCR Radio when he was just 15. That certificate will now hang in the Louisiana Missouri Historical Museum for all to see from now on. Pretty danged cool.

If you want to see some pictures, check out this link from The People’s Tribune who covered it that night. The St. Louis Post Dispatch also sent a photographer and there will be a story about the evening coming from them as well.

And word is, they may ask me to come back again next year for another concert. So stay tuned for that. 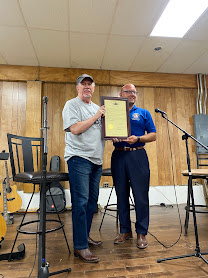 Young Jesse Vaughn from Elsberry, Missouri where I went to High School came to the show as well and I got him up to sing this song I wrote with him, “Old School Country”. He got a standing ovation…at just 16!

Also in the house was my friend Becky Denton and her talented husband Will Denton who made the trip down from Paris Missouri. Becky got up and sang our new song “Plant A Little Seed” and shared with the crowd how we just made a deal that day with Merschman Seed in Iowa to use our song for their upcoming ad campaign on TV, radio, and their social platforms. Really good news, and I can’t wait to share that when they finish their commercials up.

Because of the Mo Mo show I had to miss my son in law getting his Army wings to fly fixed wing. But my wife Kathy made it to graduation along with Casey Peterson’s family. And the video I’ve seen is so moving. My wife got to fly in a Huey helicopter alongside Casey and my daughter Heather. And Heather got to pin Casey’s wings on him at graduation. Some of the video I’ve seen is so moving and especially when the entire graduation class turns and faces all the parents and sing the Army song “Caissons Go Rolling Along”. I’ve heard that song all my life but had to look up what Caissons are. For the record, a Caisson is a wheeled cart the Army used to carry ammunition and supplies. Again, so proud of Casey, and so sorry I missed the big day. So you can see, my wife and I both had a very memorable weekend, AND my wife celebrated a birthday yesterday and we celebrated by going to see the new “Elvis” movie. Gosh, so good. They could not have picked a better actor to play Elvis. Austin Butler? You can’t take your eyes off him. And you can easily forget that he’s not really Elvis. He’s that good. Tom Hanks is also great as his shady manager Colonel Tom Parker. A large part of the movie is a reminder to all entertainers to take care of their business. Or as they point out, the business will take care of you. That part of the movie is kind of sad, but the joy of Elvis comes through, and the movie reminds us what a huge star Elvis was.

Israel has a 6th wave of COVID spreading big time. Hospitalizations up over 300% in a week. Their COVID commissioner is pleading for residents to once again “mask up”.

The nurse in NYC who was the very first person to get the vaccine will receive the Presidential Medal of Freedom.

Australia is the latest country to do away with any vaccination proof for international travelers. More and more countries are opening up again.

I’m on an airplane very early tomorrow morning with 4 other Nashville songwriters trying to get to Montrose, Colorado for a Freedom SingsUSA event where we will be writing veterans stories into songs and singing those at an outdoor concert Friday evening with the mountains in the background and flags flying. Can’t wait. BUT…I am certainly concerned about this flight and just praying we don’t get a cancellation or an ungodly delay like so many are experiencing right now. Hundreds of flights were cancelled over the weekend. It’s gotten so bad that Delta reportedly offered $10,000 to flyers that would get off a full flight from Michigan to Minnesota. And American Airlines that I’m flying on, is offering up to a $65,000 increase to pilots trying to fill the shortage they have right now.  Geez.

Scientists, believe it or not, studied jokes and with a survey of 1.5 million folks decided on what they think is THE funniest joke. Comedy varies of course, so I’m sure most won’t think this is the funniest joke they’ve ever heard. But it is funny.  Here’s their award-winning joke.

Two hunters are in the woods when one collapses. He’s not breathing, his eyes are glazed, and he looks to be dead. His buddy in a panic calls emergency services and says, “My friend is dead! What can I do?”. The operator says, “Calm down, I can help. First, let’s make sure he’s dead.” Silence, then a shot is heard. His buddy comes back on the phone and says, “Okay…now what”?

According to the American Customer Satisfaction Index folks Chik Fil A is our favorite restaurant, for the like the 4th year in a row. Why the DMV has not copied how Chik Fil A manages their long lines is beyond me. Their attention to customer service keeps us coming back for a Chik Fil A sandwich…no pickle for me please.

A Maryland woman has just won her THIRD $100,000 lottery in the last 5 years. She credits it to luck and a little research. She found out one scratch off ticket had 40 unclaimed prizes and went and bought that ticket and her lotto ship came in when she scratched it off. I try to wait until the Powerball odds make it impossible to win before I give them my money. Her technique seems to be working better than mine.

Prepping and packing for the trip to Colorado in the morning. If there’s a blog here tomorrow morning it will be an abbreviated one at best because of early trip tomorrow morning. If you don’t see a Tuesday blog, the next one will be coming from Montrose, Colorado on Wednesday

Have a great Monday…4th of July! And God bless America.